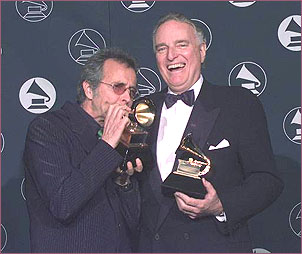 Herb Alpert and Jerry Moss, who founded A&M Records, have reaped a huge payday–$211 million in cash and stock from Vevendi Universal. It all dates back to Seagram's acquisition of music publisher Rondor Music from Alpert and Moss in 2000 for $350 million is stock. Vivendi, which later acquired Seagram, was required to pay Alpert and Moss an additional payment if Vivendi's stock dipped below $37.50 for 10 straight days.

The stock dropped below that level on April 3, 2002 and has fallen ever since closing at a tad above $12 on March 10. Alpert and Moss received $100.3 million in cash and 0.8% of Vivendi's total outstanding stock.

Alpert and Moss decided to sell their shares in April and May of last year, and according to the agreement, would receive the extra payment this month, with the figure based on the original stock price going back to when they sold the publishing company three years ago.