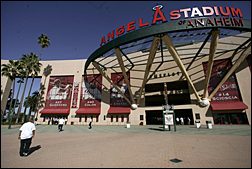 ANAHEIM (CelebrityAccess MediaWire) — The $150m dollar deal, supported by the city, would develop a 53-acre site on the outskirts of one of Angel Stadium's parking lots into a mixed use residential, commercial and entertainment complex but they would need Moreno to sign off on the deal as the lease for the ballpark reportedly stipulates that residential development is forbidden on the site.

According to the L.A Times, an August 31st meeting between city officials and Moreno devolved into a debate and at least two City Council members have stated that they intend to proceed with the development deal regardless of Moreno's wishes. Moreno has, in turn, suggested that he might resort to legal action. Moreno contends that the development would restrict traffic to the stadium and obstruct the view of the park from neighboring streets, the Times reported.

"The city wanted to open up the dialogue and get Mr. Moreno's blessing to put residential on the land," said Councilman Harry Sidhu told the L.A. Times, "But since he did not want to open up the door, we are proceeding further without any negotiation."

The City, which owns the land, has given the developer, Archstone-Smith & Hines exclusive rights to the development, with sources reporting that the deal worth $100 million could increase to 150 million if the city can convince Moreno to relent. As of yet however, he has shown little inclination to do so.

This latest contretemps isn't the first unpleasantness between the city landlords and their Lessee. In 2005, the City resorted to legal action when the team's name was changed from the Anaheim Angels to the clunky Los Angeles Angels of Anaheim. A court decided in 2006 in favor of the team but an appeal is still pending on the case. According to the Times, the City even offered to drop the suit in exchange for consideration on the current dispute. As of yet, no dice. – CelebrityAccess Staff Writers