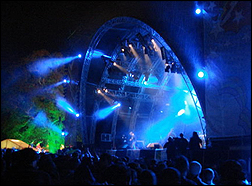 STRADBALLY, Ireland (CelebrityAccess MediaWire) — After a smattering of rain and some traffic problems on the first day, 30,000 fans were treated to a weekend of music and sunshine at the Electric Picnic festival which was held on August 31st – September 2nd in Stradbally, County Laois in the Republic of Ireland.

Held annually since 2004, the formerly one-day event has become a popular, eclectic mainstay of the festival circuit. The lineup this year featured standout performances by Icelandic songstress Bjork, who during her encore told the audience 'I think you will understand the lyrics' before launching into a rendition of her hit "Declare Independence" the Irish press reported. Other highlights included the Beastie Boys, performing for the first time in ten years in the Republic, Nick Cave & The Bad Seeds, The Flaming Lips, The Chemical Brothers and even a late night set from Chicago house legend Derrick Carter.

The festival, staged by Aiken Promotions and Pod Concerts, also featured an inflatable church, a 24-hour cinema tent, amusement park rides, massages and options to rent tents that were pre set up for the attendees and retro airstream trailers that were also available for rental.

The festival was marred by one death, a 23 year old man who suffered an unspecified medical emergency and passed after being transported to an area hospital, RTE News reported. An investigation into the death is ongoing but authorities do not expect foul play. – CelebrityAccess Staff Writers