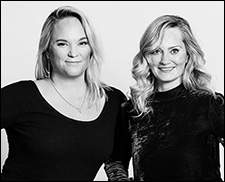 Live Nation Sweden, the leading concert producer in the country, stages events such as the Summerburst, Sweden Rock and Way Out West festivals. As well, the region handled major international tours this year such as Guns N’ Roses, Coldplay, Metallica, Depeche Mode and the Rolling Stones among others.

Anna Sjölund currently serves as the lead promoter, overseeing touring and festivals for Live Nation's Sweden office and will continue in that role along with her new Managing Director duties. She's been with the firm for more than 18 years, including three as VP Operations Central and Eastern Europe.

Anna Sjölund, MD Live Nation Sweden, said: "I have spent the majority of my career at Live Nation and had the opportunity to grow together with the business. I am excited to be able to continue my journey in this new role and look forward to what is ahead."

An industry veteran with more than 20 years of experience in the sector, Therése Liljedahl will continue as Director of Marketing & Nordic Partnership at Live Nation and in her new role, she will assume marketing, partnership, finance, administration and HR functions for Live Nation Sweden.

Therése Liljedahl, MD Live Nation Sweden, said: "I’m honoured to have been given this opportunity. I look forward to taking the next step at Live Nation Sweden together with Anna, and my fantastic colleagues.”