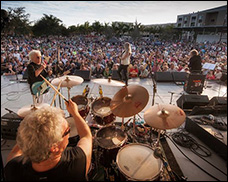 Chaquico sued his former bandmates David Freiberg and Donny Baldwin in April, claiming they are using his likeness and the Jefferson Starship name to promote their new group, despite a 1985 agreement to retire the band’s name.

Freiberg and Baldwin argued that images featuring the former lead guitarist were expressive works, not commercial speech, and exempt from false endorsement laws under the Lanham Act.

But in a 14-page ruling, James rejected arguments that the use of Chaquico’s likeness in ads and promotions were “anything but commercial speech,” subject to laws that forbid the use of false or misleading endorsements in advertising.

She found no allegations supporting a finding that Chaquico’s likeness was used in “an expressive work or in a work where the commercial and noncommercial elements are inextricably intertwined.”

James also denied a motion to strike from the complaint that the amount at stake exceeds $75,000, the threshold for federal court jurisdiction, even though Chaquico is not seeking monetary damages. Freiberg and Baldwin called that an impermissible attempt to introduce new claims in the amended complaint. But James found the complaint “does not add a new claim or theory of liability, only an additional basis for jurisdiction.”

Freiberg and Baldwin’s attorney Travis Life played down the significance of the ruling in an email Tuesday, saying his clients expect to prevail at a later stage. “It is very early in the case and this was purely a pleading motion, meaning the court has not had the opportunity to see any evidence,” Life wrote. “Once the court has seen the evidence, we expect to win on the merits.”

Life is with Leavens, Strand and Glover in Chicago.

Jefferson Airplane, one of the leading bands of the 1960s, was formed in San Francisco in 1965 and broke up in 1971 or 1972. Its hit song, “White Rabbit,” was a virtual anthem of psychedelic rock, as was its other big hit, “Someone to Love.”

After Kantner left the band in 1984, the remaining band members agreed to retire the Jefferson Starship name, according to Chaquico’s complaint. Chaquico says he gave Kantner permission to use the name again in 1993, but that permission expired when Kantner died in January 2016 — though other members of the band continued using the name.

James denied a previous motion to dismiss Chaquico’s lawsuit in August, ruling that he could pursue a breach of contract claim against Baldwin and Freiberg, but only as to breaches that occurred after Kantner died in 2016.

Also named as defendants are the other members of the current Jefferson Starship lineup: Chris Smith, Jude Gold and Catherine Richardson. The band has tour dates booked in New York, Florida, Canada and California through July 2018, according to the band’s website.