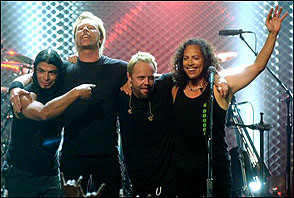 (CelebrityAccess MediaWire) — AOL Radio Network has added the All Metallica station to its lineup of "best-of breed" programming offerings and exclusive All Artist stations. Now available, the station boasts a playlist of every song ever released by Metallica.

“This great station gives our fans an opportunity to hear songs that they don’t usually hear on the radio, like obscure B-sides, live stuff from our last tour, and other deep album cuts," Metallica’s Kirk Hammett said. "After all, there’s more to Metalli-life than ‘Enter Sandman’!”

All Metallica also features rare, live tracks from the band’s 2004 “Madly in Anger with the World Tour.” Fans will be able to link to purchase those tracks from www.livemetallica.com, directly from the AOL Radio player.

"Metallica is one of the most revered Rock bands the world has ever known, and AOL Radio's All Metallica is truly a station that our audience demanded," said Jack Isquith, executive director of Record Label Relations for AOL Music. "For the last two years, there has not been a week that we did not we receive multiple e-mails from our listeners requesting an All Metallica station. We have been thrilled to work so closely with the band to give the fans what they’ve been asking for. All Metallica comes just as we unveil AOL Radio for all fans free on the web, and we are tremendously excited for the world to hear the depth and passion for Rock that All Metallica, and AOL Radio, delivers."

The All Metallica station is the first network station launch since AOL Radio went live on the web in late June, as part of the new AOL.com portal. Metallica fans can also access the 24/7 stream at www.metallica.com.– Bob Grossweiner and Jane Cohen