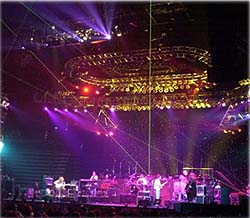 The band Widespread Panic has endorsed a crackdown on drug use and illegal drinking at a concert where about 200 fans were arrested, one died of an overdose and another committed suicide.

"Widespread Panic makes every possible effort to ensure a safe environment for everyone attending a show," a statement from the band said. "We fully support the actions taken by local police to eliminate drug dealing and underage drinking at all Widespread Panic concerts."

The arrests by undercover state agents and police occurred last weekend, when a series of sold-out concerts drew about 30,000 fans to the Oak Mountain amphitheater at nearby Pelham. The Birmingham News reported the band's statement Thursday.

Erica Young, 29, of Chattanooga, Tenn., collapsed at the Saturday show and died of what police said was an overdose of the drug Ecstasy.

"The band, management, and crew members of Widespread Panic send their deepest condolences to the family and friends of the young lady," the statement said. "Throughout the 15 years the band has been performing, this is the first time we have encountered this type of incident."

Police also said 24-year-old Jennifer Moe of Steamboat Springs, Colo., a follower of the band, committed suicide at a motel.

The group's statement said they hopes fans attend their concerts "equipped with only an appreciation for the music and respect for their fellow concert goers."