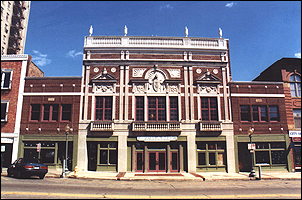 Pontiac's historic Strand Theater is closer to fulfilling its potential as a cultural hub in southeast Michigan with the selection of a topnotch team to handle the facility's restoration.

At its helm is architect Lorri D. Sipes, FAIA, Principal-in-charge and Lead Designer, of the SmithGroup's Ann Arbor office. Sipes is renown for melding period charm with contemporary utility and cutting edge innovation; her previous successes include the Urban Institute for Contemporary Arts in Grand Rapids, the Furniture Factory performance space in Detroit and the Crazy Wisdom Bookstore & Tea Room in Ann Arbor. Her SmithGroup team will include, among other professionals, a preservation architect, an urban designer, a redevelopment consultant and an entertainment consultant.

They are joined by local architect Beverly Hannah Jones, A.I.A., of Hannah & Associates, Inc., with offices in Detroit and Pontiac. Jones was the first African-American female registered architect in the Midwest to own her own firm, and is one of only a handful in the nation. As construction administrator, she will work hand in hand with Sipes and her SmithGroup colleagues. Jones's previous clients include the Detroit Medical Center, Wayne State University and Detroit Metropolitan Wayne County International Airport.

Their task at the Strand will be to transform the 82-year-old structure — now conjoined with two adjacent historic commercial buildings — into a 30,000-square-foot theater center boasting everything from a 600-seat proscenium theater to a digital screening room. Other portions of the Center will house a flexible "smart space" performance lab seating up to 200, a two- level cabaret, an upper lounge useful for community or corporate events, a grand main lobby, and an arts-related boutique.

The three-story, Renaissance-style Strand, built in 1920 and listed on the National Register of Historic Places, is undergoing its major facelift under the watchful eye of Kimberly Johnson, who worked similar magic at Detroit's Opera House and Music Hall for the Performing Arts. Johnson serves as Interim President of Strand Theater Center, Inc., a private, non-profit 501 (c) (3) corporation charged with transforming the aging jewel into a cultural, film and theater center.

"I'm very excited to have secured such an outstanding team to bring the Strand back to life for the citizens of Pontiac and the whole region," she says. "These professionals are well-known in their respective fields for excellent results on assignments such as this, and I look forward to working with each and every one of them."

The project, funded by a combination of city, state, federal and private monies, has been in the planning and fundraising stages for more than a year; preliminary demolition got underway in January.

The new incarnation will open the facility's doors for the first time since the early 1990s, when Detroit's Attic Theater briefly staged productions there. Before that, the box office had been shuttered since the 1970s, when the once-vibrant family movie house had fallen onto hard times, attempted survival as an adult-movie emporium and finally closed. It was purchased by the city of Pontiac in 1986 for eventual restoration and re-use.

Originally designed by Pontiac architect Leo John Heenan, the Strand, at 10 N. Saginaw St., was, in its heyday, one of eight thriving movie palaces comprising a bustling downtown Theater District. The sole survivor (another former theater, the Eagle, was converted to a nightclub), its future promises to be aglitter once again, with live theater, musical performances, cabaret, films, community events and more.

"It's wonderful that this venue is getting to the point where it is becoming a reality," says Pontiac Mayor Willie Payne. "It will afford the opportunity to bring more cultural activities to the community for our own citizens as well as for others in the area, featuring both local talent and national acts. It will attract new people to our downtown, and will benefit the restaurants and other businesses as well. We in the administration will do whatever we can to help the project succeed."

Target date for completion is late 2002, with programming set to begin early next year.