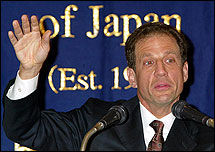 With this promotion, Tellem's duties expand to also oversee continued development and management of SFX Sports Group brand practice groups. Tellem, who is known globally as one of the most successful dealmakers in sports, and who has led SFX Basketball and SFX Baseball to unparalleled success, has been integral part of SFX executive management since he began working with the sports marketing giant in 1999.

"I have enjoyed working in a profession that I love, alongside a great team of colleagues and clients," said Tellem. "I am excited to take on this new challenge and look forward to expanding the SFX brand both domestically and internationally. I am optimistic that 2005 is going to be a banner year."

Tellem has been representing professional baseball and basketball players since the early 1980's and currently represents Nomar Garciaparra, Pau Gasol, Jason Giambi, Hideki Matsui, Tracy McGrady, Mike Mussina, Jermaine O'Neal, and Reggie Miller. Under his leadership, SFX Basketball represents over 18% of NBA players and SFX Baseball, over 16% of MLB players. Tellem is a staunch advocate of players' rights and is considered a leading expert on the NBA's Collective Bargaining Agreement.

"Arn Tellem is an invaluable member of the SFX family," says Jeff Lewis, Chairman Clear Channel Entertainment Sports. "He is considered one the sports industry's most respected professionals and we are so happy that he is on our team. "We look forward to working with Arn for many more years and value his management ability as he oversees and grows the SFX brand."

Arn Tellem is a graduate of Haverford College and University of Michigan Law School. He is married to Nancy Reiss Tellem, President of CBS Paramount Network Television Entertainment and lives with their children in Los Angeles, California.