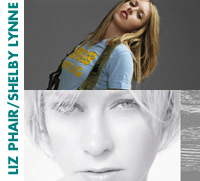 The MUSIC CHOICE concert series showcases both established and emerging bands with live performances and interview segments. "MUSIC CHOICE Presents Shelby Lynne &Liz Phair" features a 60-minute concert that will be available in over 30 million cable households. A 75-minute version of the concert will air in February in over 12 million DIRECT households. –Bob Grossweiner and Jane Cohen

Live and Unwrapped features Gloria Estefan and the Miami Sound Machine and her 23 piece band in an intimate performance at the Caesars Palace Colosseum in Las Vegas. The in-theatre presentation and DVD includes hits from the band's extensive repertoire of music, including "Conga," "Reach," "Mi Tierra," "Get on Your Feet," "Live for Loving You," among others, as well as new songs from her recent CD Unwrapped, such as "Your Picture," "Hoy," "I Wish You," and "Wrapped."

"When I imagined myself up on the 'Big Screen," says "Estefan, "I never thought it would be like this. It's a great opportunity to connect with my fans and allow them to see concert footage like they've never seen before. I'm happy that 'Live and Unwrapped' will be seen somewhere that will showcase the grandness of the 'Colosseum' at Caesars Palace and the uniqueness of this very intimate show," expressed Estefan.

Live and Unwrapped was directed by Emmy Award-winner Larry Jordan and was choreographed by renowned television and film director, Kenny Ortega (Dirty Dancing, Chicago Hope, Ally McBeal). Other concert features include "living scenery/puppetry" by Michael Curry (Broadway's The Lion King), over a dozen performers including dancers and percussionists and a specially designed video display. –Jane Cohen and Bob Grossweiner

Bowie Not Intimidated By His Own Music

SAN FRANCISCO (AP) — These days, David Bowie isn't intimidated by his own music.

Touring as a headliner for the first time in more than seven years, Bowie told the San Francisco Chronicle that the music he made as a glam-rock pioneer was dragging him down throughout the 1990s.

"I really felt, in all honesty, fairly intimidated by my catalog at the time. I really had to work out a new way of approaching what was going to be the '90s, and I needed elbow room. I didn't want those things staring me in the face every time I went to do a show."

Bowie's hits include the songs "Let's Dance" and "Serious Moonlight" and the album "The Rise and Fall of Ziggy Stardust and the Spiders From Mars." His last few albums include "Earthling" and "Heathen" and "Reality."

Now the 57-year-old singer-songwriter has worked up more than 50 songs for his latest tour, playing material from throughout his career,

"As the '90s went along," he said, "I felt more and more confident about the writing I was doing. Now that I'm here, 2004 now, I kind of feel there are certain amounts of the new material that balances well with the older material. And the older material doesn't seem so intimidating anymore."

Scott Weiland Ordered Back To Rehab

Weiland, 36 was ordered to report to the facility last October after pleading no contest to possession of heroin. A Superior Court judge learned Friday that he had walked out or was discharged after only a month and ordered him to return, said Jane Robison, a spokeswoman for the Los Angeles County district attorney's office.

Weiland reported back to the facility Friday afternoon. He is eligible for release in July but must participate in a six-month follow-up program.

If he leaves the center again or tests positive for drugs, prosecutors will seek a warrant for his arrest, Robison said.

Weiland was jailed in 1999 for violating probation on a previous drug arrest and failing to complete a rehabilitation program.

In a separate case, attorneys for Weiland entered an innocent plea for the singer's misdemeanor count of driving under the influence, stemming from his arrest last October in Hollywood.

He is due back in court on that case on Feb. 5.

NEW YORK (AP) — Yolanda Adams is two months pregnant with her second child, but the gospel singer isn't slowing down.

Already the mother of a 3-year-old daughter, Adams is still on tour, she recently co-hosted gospel music's 19th Annual Stellar Awards and she'll participate in the Super Bowl Gospel Celebration, which takes place two days before the Feb. 1 Super Bowl.

The 41-year-old says she's used to keeping up a heavy pace: "I toured up until the eight and a half months (last time)."

Adams is a big football fan, and the game is being held in Houston, where she lives. But while she's gearing up for the pomp and circumstance surrounding the big event, she's not as excited about the actual game this time around, with the New England Patriots-Carolina Panthers matchup: "None of the teams that I thought would be in it are in it. I was hoping that the (Tennessee) Titans would have been in it."

She was more enthusiastic about the Stellar Awards, which also took place in Houston earlier this month. Among those present for the awards, which will broadcast in syndicated television markets starting Saturday, included gospel stars Shirley Ceasar, Kirk Franklin and Donnie McClurkin, as well as R&B stars such as Musiq, Ruben Studdard and Patti LaBelle.

Adams says the participation of secular stars shows how widespread an influence gospel music has.

"It is extremely important for the general public to realize that these people came from the church, came from choirs, came from a diverse background that includes gospel music," she says.

"He looks fabulous. His face is back to being the regular Jerry Lewis," said Candi Cazau, spokeswoman for Lewis and The Orleans hotel-casino in Las Vegas. "When you see the before and after pictures, it's incredible."

Lewis, who turns 78 in March, was focusing on a strict diet and exercise program and was planning a March 3 performance at The Orleans, Cazau said.

Lewis signed a 20-year contract with the off-Strip hotel-casino shortly before being diagnosed with pulmonary fibrosis. He last appeared on stage at The Orleans in April 2001.

In September, Lewis appeared bloated and puffy during the 38th annual Jerry Lewis Labor Day Telethon, which raised a record $60.5 million for the Muscular Dystrophy Association.

He checked in Oct. 6 at Sunrise Hospital and Medical Center for a managed withdrawal from prednisone, a steroid he was taking for the chronic lung ailment. He was discharged Jan. 16.

NEW YORK (AP) — Pianist Hank Jones remembers well how almost 45 years ago he posed for an Esquire magazine cover shot with dozens of jazz legends crowding the front steps of a Harlem tenement.

On Friday, Jones and more than 20 other jazz greats crowded a spiral staircase in a luxury penthouse suite at the New York Hilton for a photo portrait. The photo shoot preceded a luncheon organized by the National Endowment for the Arts for past and present recipients of its Jazz Masters Awards.

There were many embraces and shared reminiscences among musicians whose touring schedules often keep them apart.

"It's a very happy, warm feeling because we lose people every year," said the 85-year-old Jones, who had a chance to greet fellow pianists Dave Brubeck, Cecil Taylor, Horace Silver, Randy Weston and Billy Taylor. "It's good to see all the people you've known for years and don't get a chance to see every year."

The photo shoot had special meaning for Jones, Silver and saxophonist Benny Golson, who were also in Art Kane's historic 1958 "A Great Day in Harlem" photo that included many departed jazz legends, including Count Basie, Thelonious Monk and Charles Mingus.

For Jones, the contrast between the two photo shoots is a welcome sign of the greater respect now being shown to jazz artists.

"I think there's a lot more awareness and recognition of the accomplishments of the so-called jazz masters … than there was back in those days," said Jones.

That's what the NEA's new Chairman Dana Gioia had in mind when he expanded the Jazz Masters program, established in 1982, this year by establishing six award categories, boosting the cash award for each recipient to $25,000, and sponsoring a 50-state Jazz Masters concert tour that begins in April featuring a variety of artists.

"Jazz is one of the greatest American art forms … but it's become marginalized in our culture," said Gioia. "We're really here to celebrate jazz not as an art of the past but as one of the dynamic art forms of the present."

The luncheon preceded an evening awards ceremony and concert organized as part of the International Association for Jazz Education annual conference.