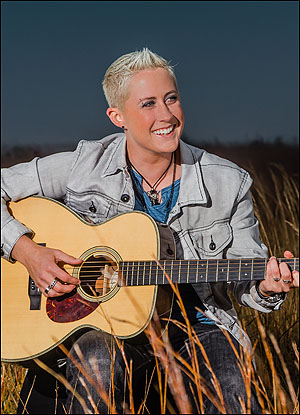 Nashville, TN (CelebrityAccess) – Country newcomer Kristen Merlin released her debut EP, Boomerang, on Jan. 20, 2015. Merlin, who finished 4th on season 6 of NBC’s Emmy Award-winning show, The Voice, is coming off the show’s US tour and making her debut with the five-song EP.

Boomerang, which is available on iTunes, Amazon and other major digital retailers, was produced by Corey Britz, engineered by Paul Fig and recorded at Southland Records in Los Angeles. The five-track EP features four songs written by Merlin, while title track, “Boomerang,” was co-written by Corey and Kara Britz.

Merlin commented of the project, “I am super excited to take this next step in my career and finally release some original work to my fans! This EP is filled with heartfelt tunes that listeners will be able to relate to. Many thanks to all those who were involved in seeing this project through from start to finish! I couldn't be more proud of the finished product.”

Merlin’s music career began in the first grade where she made her solo debut with “Never Never Land” at her elementary school’s rendition of Peter Pan. From that moment on, Kristen Merlin knew the stage would be her home, and began to perform at every opportunity that came along. In her junior year of high school, Merlin’s mother gave the young talent her first acoustic guitar, and in a few short months, she was a self-taught guitarist and began writing her own material.

After earning her BA in Music and Sound Recording from the University of New Haven in Connecticut, and brushing up her performance chops all over Massachusetts with her self-titled band, as well as another one of Boston’s leading cover bands, Six Foot Sunday, her talents landed Merlin a spot on The Voice. After her audition performing Sugarland’s “Something More,” and some heated haggling between coaches Adam Levine and Shakira, Kristen joined Team Shakira and became a powerhouse female staple of The Voice: Season 6. Kristen is now making her debut with original music.

Her EP, Boomerang, is a collection of modern classic country love songs, showcasing Kristen’s “unique and distinct tone” as well as her vocal range.