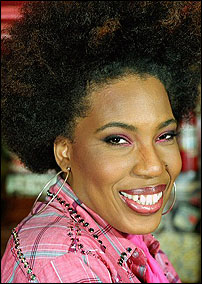 LOS ANGELES (AP) — Only two years ago, Macy Gray was on top of the music world — a critical and commercial darling with a multiplatinum debut album, a Grammy and a ubiquitous hit single.

Then her second album landed a week after Sept. 11, with a resounding thud. Now, as Gray prepares to release her third album, "The Trouble With Being Myself," the 32-year-old singer-songwriter finds herself in the uncomfortable position of having to re-establish herself as a pop success.

"Music is all about timing," reflects Gray. "You could put out the hottest record in the whole world — if it's not the right time for it, it won't work."

Timing was certainly part of the problem surrounding Gray's "The Id." In the wake of the terror attacks, Gray's sexy, exuberant attitude didn't mesh with the somber, healing tone of the times. "The Id" sold about 585,000 copies, according to Nielsen SoundScan — decent numbers for some artists, but a flop compared with the 3.3 million copies sold for her debut, "On How Life Is."

Gray admits that the response to "The Id" left her "freaked out."

"You're given all these things and all of a sudden they're taken away," she says while sitting in her manager's offices, wearing a sweat suit and a cap to cover her braided hair.

But Gray — one of the industry's more colorful characters with her squeaky-scratchy voice ("You either love it or you hate it," she says), blowout Afro and bubbly personality — hasn't grown up THAT much.

Her new album still has that ribald sense of humor and lyrical wit. And her musical style — a combination of psychedelic soul, funk and rock — continues to defy simple categorization.

"She has a strong, keen sense of pop writing, her narratives are way above and beyond anyone in contemporary black music that I know of," says Ahmir "?uestlove" Thompson of The Roots, a friend of Gray's.

But "The Trouble With Being Myself" is more toned down — a bit more finessed, says Dave Way, the disc's co-producer, who has worked on all three of Gray's albums. Both Way and Gray described "Trouble" as "elegant."

"I think it's more different in the last one in that it's not so indulgent," says Way. "Macy was just feeling great with all the success from her first album, and when it came time to make a record, she wanted to try everything … and was given license to do whatever she wanted."

But Way says "The Id" was still a great album that never got the opportunity to shine.

"We were bummed that it didn't catch on, because I think there were great songs on that record that nobody ever heard," he says.

Gray was partly responsible for that — she admits that when the disc debuted poorly, she immediately started working on new material and stopped promoting "The Id."

"Now today, I know, you never do that. You make it work … (but) it was just some superstar (stuff)," she says of her attitude, laughing.

If Gray was feeling like a superstar, she certainly seemed as if she was on her way with "On How Life Is." With her unique style and sound, she was a burst of energy on the cookie-cutter pop scene. Word of mouth and critical acclaim helped build album sales, along with her aching love song "I Try," which earned her a Grammy for best female pop performance.

"Macy totally established herself and carved her niche outside of the microwave, sad process that black music is currently trapped inside of," says Thompson.

And the success was dizzying for Gray (real name: Natalie McIntyre), an Ohio native who dabbled in screenwriting and worked behind the scenes as a singer and musician in Los Angeles before getting her break. After her smashing debut, she quickly became a hot Hollywood ticket — she even landed a bit part in "Training Day," which won Denzel Washington his second Oscar.

"The first album, I don't think she was expecting — I don't think any of us to take off the way it did," says Way. "All of a sudden, Elton (John) and Bono are telling you how great you are."

"When everybody's, like, screaming your name, and you're the hottest (thing) — that's like the best," Gray admits. "You don't really have to face reality, not at all."

"You can say, pick up the phone and say, `I don't want to deal with reality today, so can you please handle that for me?' And somebody will do it," she says, laughing.

But suddenly landing on the "out" list wasn't much fun.

Besides having to deal with fleeting fame, she also suffered a personal loss when her father died of cancer last year.

"He was really afraid. I never forget him asking me if I thought he did well," she says. "I've never heard him ask anyone what they thought of him."

With all the personal and professional changes in just the last few years, Gray has learned to take the world of celebrity in stride — although she admits she still is "as hungry I've ever been."

"I don't like to lose," she says. "Nobody wants to lose what you've got. Even if all you've got is a paper bag, you're not trying to lose that."