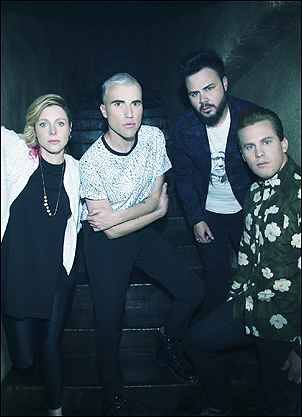 LOS ANGELES, CA (CelebrityAccess) – Neon Trees recently released their new single "Songs I Can't Listen To." The new song, written by Tyler Glenn, is sharable on VEVO and is available for purchase on iTunes.

"This song idea came to me at a pivotal time in my life," said front man Tyler Glenn. "My best friend didn't want me in her life anymore, and a few weeks later I started seeing someone that excited me, and music was a central part to both relationships. Now neither people are in my life, but all those songs are…And I'm instantly transported to intimate moments with those people whenever those songs come on."

Neon Trees – comprising of Tyler Glenn (lead vocals, keys), Chris Allen (guitars), Branden Campbell (bass), and Elaine Bradley (drums, vocals) – released their third album Pop Psychology on April 22, 2014. It is an upbeat collection of sleek, modern alternative pop songs powered by singer-songwriter Tyler Glenn’s bright melodies, huge choruses, and witty lyrics about the challenges of finding love in the digital age. With disarming honesty, songs like ”Love In the 21st Century,” “Text Me In The Morning,” and “I Love You, But I Hate Your Friends,” cleverly capture the millennial concerns referenced in the titles and deliver them in impeccably shiny sonic packages, thanks to the band’s performances and production by Glenn’s long-time friend and songwriting collaborator Tim Pagnotta. RIAA platinum-certified first single "Sleeping With A Friend," won a BMI Publishing Award in 2014 and charted in the Top 15 of the Billboard Hot 100.

Style-wise, Glenn feels that Pop Psychology blends sounds from the Provo, Utah-based quartet’s previous two albums, 2010’s guitar-pop-driven Habits and 2012’s electro-fueled New Wave-inspired Picture Show. “I think this is the first record where we combine both and really sound like Neon Trees throughout the entire album,” he says.

The band's tour "An Intimate Night Out With Neon Trees" will kick off June 6th in Seattle, WA at the Showbox and cross the country before winding down on July 25th in Boston, MA at Paradise Rock Club. The band has toured with Taylor Swift, The Killers, Maroon 5, Duran Duran, Flaming Lips, My Chemical Romance, and more.