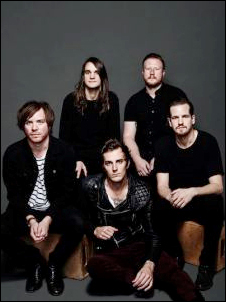 can be a draining experience physically, mentally, and, of course, financially.

tour. Here we talk with the indie rock group about this upcoming unpaid tour, the

for hours on end, sleeping on floors, and spending a lot of time with the same

small group of people for a very long time – it’s not easy, but these are the

rites of passage that independent artists and bands must endure. Whether you’re

cities over a week, touring truly is an essential element of building your fan

base and growing musically.


Tempe, Arizona-based indie rockers The Maine can tell you all about touring.

They’ve been releasing music since 2007, and in 2011 they split with Warner

Brothers to set their sights on distributing through TuneCore (via their label,

8123). On the heels of their 5th studio album, American Candy, the five-piece

outfit decided to shake things up in a way you’ve likely never seen before: The

Maine announced a 13-city tour, with each show being completely FREE for fans to


Did we mention that touring is expensive? These guys gave their fans the ultimate

‘Thank You’ with their Free For All Tour this year, and we got the chance to talk

to them about it. Read on for our interview with The Maine’s John O’Callaghan and

Pat Kirch as we discuss the Free For All Tour, fan reaction, engaging new fans,


What inspired the Free For All Tour? What was the initial fan reaction when you


John O’Callaghan: Our necessity to push ourselves creatively when it comes to the

us to construct the Free For All Tour. I think bewilderment, a bit of confusion

and extreme excitement overtook the 8123 family when we first announced. People

couldn’t make it out to a show, and that means the message was conveyed and in

our eyes it was a major success.

industry, how did you go about building a community of dedicated fans?


Pat Kirch: For us it has always been about personal interaction with people. At

on tour, then it turned into us making sure we talked to every person that came

to the shows. The relationship feels much more like a family than just a band and

fans. I think the other thing we have done is kept things interesting for

ourselves which comes through to the people that pay attention to what we do. We

tour twice. We are always trying to push the limits on what is possible for our

band to accomplish and create.

Similarly, as you continued to release music, how have you maintained that

beyond the music and is due, in large part, to the sense of community they (the

individuals) have developed themselves. We feel as though if we continue to

hip on what we’re doing. If we falter and begin to take their support for

granted, that’s the end of the whole show. We’re simply trying to take what is

nurture both so it all doesn’t fall apart.

a band. What has it taught you about your fan base?


PK: Being a fan of music first and foremost, the Free For All Tour has brought

bands (if any at all) have ever done before. In the age of the paid “meet” and

greet, we delivered the exact opposite experience and, save for a few sleepless

nights, pulled the thing off without a hitch thanks to the help of some amazing

people at 8123. That alone makes us feel like we’ve done something worth while.

who love music. That rules.


How did the fans in each city react to your shows on this tour?

It was really great! Some of the shows felt more like a festival show where

the band but they came because it was free. That was a great thing for us because

even though we were doing our own headlining tour, it still felt like we needed

a band. The nature of the tour was so different than anything we have done before

that it didn’t even feel like we were on tour. It felt like a bunch of random

shows put together; every date was different and that kept it fun for us each


JO: We had too many amazing interactions with people on the road to pinpoint one

in particular, but the fact that after polling the audience most nights for

raised was something that really resonated with me. This just reaffirms the

benefit of the tour for us as a band and makes us rather hopeful for the future.


Tell us about the recording and release ofAmerican Candy. How has the reception

of this album played into the Free For All Tour?


JO: Recording took place in a house in Joshua Tree, CA back in November 2014. We

on a sonic vacation from the chaos of everyday life. Feeling the support on the

road and online really dictated the move to do the tour. We wanted a new platform

allowing them to do so for free felt like the most appropriate move. Couldn’t be

happier with the response and turnout on all accounts, and now we can’t wait to

reinvent ourselves with future tours to see if what new ideas arise!


How has your experience been using TuneCore for digital distribution?

It has been such an important tool for our band for the past 5 years! We made

make. We were able to release that album all around the world via TuneCore in a

very short amount of time once we got out of the deal.


From that point on we have never looked back. It has allowed us to be much more

after recording them and get it heard all around the world. It has made it so we


PK: I would say first off never forget that the music comes first and that you

need to make something you love and not what you think people will enjoy! Then I

that. Let that idea lead every decision you make.

some new music. It is not time for an album yet but we will be releasing new

music in some way or another! — Guest Post by Kevin Cornell on the Tuncore Blog