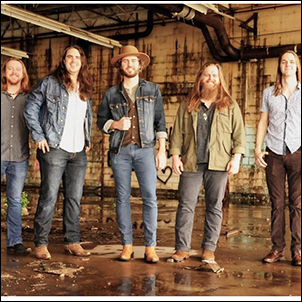 Just back from their third European tour, The Vegabonds are gearing up to hit the road again this week. Kicking off this Thursday, July 27 in Kalamazoo, MI, the tour will take the Alabama-born, Nashville-based five-piece throughout the East Coast with stops in Chicago (7/30), Milwaukee (8/8), Washington, D.C. (8/12), Brooklyn (8/15), Athens (9/9), Birmingham (9/22), Charlotte (9/23), Kansas City (9/28), and Baton Rouge (10/5), among other cities; see below for a complete list of dates. This run comes as the band is promoting their latest single release, "Long Haired Country Boy," an homage to the Charlie Daniels Band original.

Watch the video for "Long Haired Country Boy" now on YouTube and check out the single on Spotify and iTunes.

The music video first premiered exclusively on The Boot. "We've always loved 'Long Haired Country Boy' and felt it was a tune we could-musically-make our own while still doing the original justice," the band explains. "Our band hails proudly from the South, and as such, the lyric speaks to our upbringing. Ironically, when thinking about a strong cover we could add to our live set, we found that not many bands had recorded versions of 'Long Haired,' so it gave us even more reason to put our best foot forward. And when you have a lead guitarist as talented as we do, why not let them put their foot on the gas?"

Since forming in 2009 by playing the college circuit across the Southeastern U.S., The Vegabonds -Daniel Allen (lead vocals), Richard Forehand (guitars/vocals), Paul Bruens (bass), Beau Cooper (keys/vocals) and Bryan Harris (drums)-have released three full-length albums and are close to completion on their fourth. Their most recent, 2016's What We're Made Of, was produced by Grammy-nominated producer Tom Tapley, whose portfolio includes Elton John and Bruce Springsteen, among others. Tapley returned to the studio for "Long Haired Country Boy" and is working on the forthcoming album as well, to be released early 2018.

With a sound reminiscent of Tom Petty & The Heartbreakers mixed with the grit and twang of the Allman Brothers Band, The Vegabonds give their fans a sensational performance with powerhouse guitar riffs and impactful songwriting night after night. Their hard work and unbridled talents have not gone unnoticed; the group has opened for such notable acts as Lynyrd Skynyrd, the late Gregg Allman, and Kid Rock, among others, and performed at several festivals including Peach Fest, Magnolia Fest, Sunfest, and Toadlick. More dates are being added and will be announced soon.

About The Vegabonds
As one of the hardest-working bands in the southeast, The Vegabonds have won over thousands of fans by maintaining an exhaustive touring schedule. Hundreds of shows and two European tours later, the band finds itself on the brink of a global takeover. The band’s high-energy, guitar-driven brand of rootsy rock & roll has made them a favorite across the globe, and the next year promises to be a breakout one for the band on a national stage.

With their third European tour under the belt, three full-length albums including a fourth nearing completion, and a gravitational pull to their growing fan base down every American highway, The Vegabonds are on a musical pilgrimage to spread the gospel of pure, unadulterated New South Rock.

Some might assert that their sound is Americana, while others may consider them to be true rock ‘n’ rollers. Regardless of what fans like to call them, the Alabama-born, Nashville-bred quintet is pulling themselves up by the bootstraps just in time for 2018, forging ahead into the future by avoiding pigeon holes.