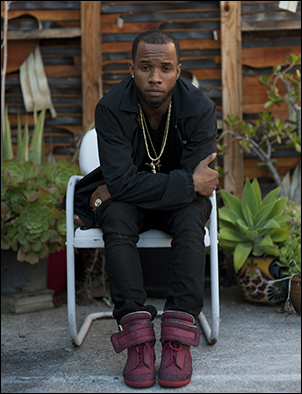 (CelebrityAccess) – Lanez’s highly anticipated I Told You album released via Mad Love/Interscope Records, debuted at #4 on the Billboard 200 with 52,000 album units—32,000 pure album sales and nearly 25 million streams—marking the highest sales of a debut urban artist this year.

Tory Lanez has been one of the more versatile commercial artists to surface during the early 2010s. A songwriter and producer who flits between and fuses R&B and rap — his vocals alternate between swift and rugged boasts and smooth and sensitive come-ons — he made steady strides toward the mainstream with numerous mixtapes, guest appearances, and self-directed videos.

He spent parts of his early life in Toronto, his birthplace, as well as in Montreal, Miami, Atlanta, and New York. Although he was known underground well before his 20th birthday, and was supported early on by Sean Kingston, he made some of his biggest moves in 2014.

During that year, he was featured on "Me & My Bitch" — a track off YG's Top Five album My Krazy Life — and among his own tracks that circulated in 2014 was "The Mission," his first cut to hit Billboard's Twitter Emerging Artists chart. In July 2015, after he had signed an Interscope-affiliated deal with Benny Blanco's Mad Love label, he released "Say It," an R&B slow jam that sampled Brownstone's mid-'90s hit "If You Love Me" and peaked the following February at number 23 on the Billboard Hot 100 (Andy Kellman, Rovi).

Currently, the album I Told You features breakout single “LUV,” which reached #28 at pop radio this week and is #1 on Rhythmic radio charts as well as #21 on the Billboard Hot 100. The video for the track was produced by Benny Blanco and Cashmere Cat. Lanez’s massively successful debut single ”Say It,” also featured on I Told You, is now certified RIAA Platinum after peaking at #1 on both the Rhythmic and Urban radio charts.

Lanez has now added new dates to his North American tour this fall and winter, including a second hometown show in Toronto on December 5 and further appearances in Philadelphia; Silver Spring, MD and more. A Boogie, Dreezy, Trill Sammy, Taylor Bennett, J.I.D. and Kurt Rockmore join Jacquees, Kranium and VeeCee as support on select dates.

Tickets for the new dates are on sale now via http://www.IToldYouTour.com.

I Told You continues to receive critical acclaim:

“Tory is a heartthrob on the rise. It’s not rare to hear his pleading vocals floating out of cars and bleeding from strangers’ headphones on the subway.”—The Fader

“Most likely to break out”—USA Today

“…one of the hip-hop world’s buzziest names.”—Billboard

“One of the defining albums of the late summer”—The Guardian

“He’s built a reputation for having an honest, upfront personality that shines through in his emotive lyricism and willingness to experiment with everything from dancehall pop to reggae and R&B.”—NYLON

“He’s achieved, but he’s only getting started.”—Complex

“I Told You has every right to resonate with such insistent grandeur.”—Hot New Hip Hop