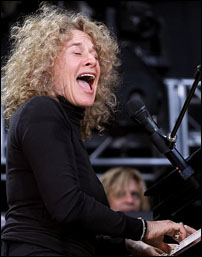 BOSTON (CelebrityAccess MediaWire)– A broad spectrum of artists will take the stage at the 2004 Democratic National Convention at Boston's FleetCenter from July 26-29. Opening night July 26 will feature performances by Patti LaBelle, Gerald Levert and BeBe Winans. Wyclef Jean, Brian McKnight, John Mellencamp, and the Black Eyed Peas will all perform on July 28. Closing night July 29 will feature performances by Carole King, Willie Nelson and Mavis Staples. More artists are expected to be added.

"With just three days to go until the opening gavel of the 2004 Convention, energy and excitement is nearing its peak," said Rod O'Connor, CEO of the Democratic National Convention Committee. "The artists who will perform on our Convention stage reflect the inclusive spirit of our Party, and we are proud to welcome them all to Boston in the coming days."

The 2004 Democratic Convention will also showcase the talent and spirit of Massachusetts youth. In May, the DNCC and FleetBoston Celebrity Series announced Student Performances at the 2004 DNC — a collaborative effort to select young performers ages 5 to 18 from around Massachusetts to perform at the FleetCenter during the Democratic Convention. The four local youth performance groups selected to perform are: the Middlesex County 4-H Fife and Drum Corps, Children's Voices of Greater Boston, City Youth Dance Ensemble and Kwong Kow Chinese School Drum Ensemble. –by Jane Cohen and Bob Grossweiner