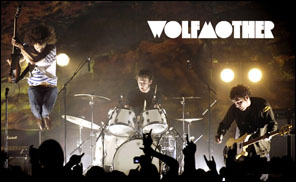 LOS ANGELES (CelebrityAccess MediaWire) — As promoter Live Nation has grown to giant proportions, there has been some inevitable push-back as people decry the imperial excesses of the new power bloc.

A recent experience by one WolfMother fan may take some of the wind out of their sails however. With the Download Festival preparing to descend on the bay area, our intrepid Wolfmother fan, eager to see the band, went online to purchase a ticket for the main stage for $49. Unfortunately, for him, Wolfmother soon called the rest of their tour off, after the bassist's new child arrived ahead of schedule, leaving the fan with a $49 ticket for a show he no longer had any interest in.

Still, he called Live Nation to see if he could secure a refund. Fully expecting that he would be rebuffed, our fan was surprised when customer service rep Robin told him that because of the last minute cancellation, that LN would be willing to refund the ticket price if only the fan would FedEx the ticket to them as sales were set to conclude the following day.

Still, our fan was unrelenting, pointing out that it seemed unfair to shell out money for a FedEx charge just to get a rebate but Robin told him that it was the best she could do. Seemingly stymied, our fan said he would think about it and concluded the call. Fast forward 20 minutes when his phone rings and to the fan's surprise, it was Robin, who stated that she had confabulated with her supervisor and that they could send the refund if the fan agreed to snail mail the ticket on "good faith." Within the hour, the Wolfmother's credit card had been debited for the full price of the ticket.

This transaction may have gone unheeded if it were for the fact that said fan is a poster on consumer affairs blog Consumerist.com. He duly posted the story and Live Nation got the credit it deserved for the exchange.