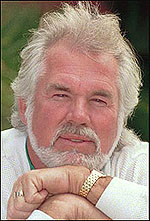 (CelebrityAccess News Service) -– The International Entertainment Buyers Association will honor Kenny Rogers with an award for Lifetime Achievement to be presented at IEBA Live!, the organization's 33rd Annual Conference to be held on October 7 in Nashville, TN.

For the past 40 years, Rogers performed more than 120 dates each year, including his annual 25-city Christmas tour which just celebrated its 15th season. An impressive career spanning over six decades, Rogers broke ground domestically as the first country artist to consistently headline sold-out arena tours in the late 1970s, opening the doors for other country artists.

Ranked as the fourth top-selling male artist of all time, according to the RIAA, with record sales now over 105 million albums worldwide, Rogers' numerous accolades and awards include three Grammy Awards, 18 American Music Awards; ACM Awards, the RIAA Diamond Award for more than 10 million copies sold of his "Greatest Hits" Album. –by Bob Grossweiner and Jane Cohen

Event a Fund-Raiser for Monroe's Mandolin

ROSINE, Kentucky (AP) — The Jerusalem Ridge bluegrass festival was supposed to be a celebration and homecoming for Bill Monroe's famed Gibson mandolin.

Instead, the Aug. 28-31 event will be a fund-raiser for an effort to return the instrument that Monroe, recognized as the father of bluegrass, used to create the music form.

The foundation is attempting to raise nearly $1 million it owes to Monroe's son, James, who has sued in a Nashville, Tenn., court to regain title to the instrument. It was to have paid Monroe the remaining $962,000 it owes him for the instrument last October, but was unsuccessful in raising the money or in securing a bank loan.

Campbell Mercer, executive director of the Bill Monroe Foundation, envisions the battered mandolin as the centerpiece of a museum honoring the performer, who died in 1996 and is buried in Rosine.

Mercer said he's hopeful the festival, which attracted about 2,800 people last year, will generate up to $200,000 to be used toward the purchase of the mandolin.

Forty-seven bluegrass bands and entertainers, including former members of Monroe's band, will perform.

"It's a historic outpouring really of love for Mr. Monroe and this culture and tradition," Mercer said.