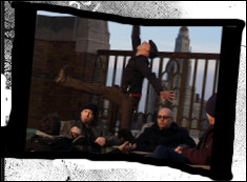 NEW YORK (Hypebot) — NY indie band Telling On Trixie has dubbed itself "A Band With A Plan" and launched abandwithaplan.com to raise $50,000 and involve fans in the decision making process as they record and release a new album and video.

A Band with a Plan differs from other recent crowd-sourcing models. "In some programs, one-third of the money raised goes to some company that devised the model, and there's nothing left for marketing, much less a video," says lead singer Derek Nicoletto. In this D.I.Y. effort every penny goes to finance the album and video. "And instead of just asking fans to donate, as some artists have done, we're inviting them to hop on board on our 'Little Engine that Could' and go with us on the ride."

"Telling on Trixie fans tend to give us their opinion on everything from our clothes to our set list," according to Nicoletto. "So we thought – let's get their input from the beginning and give them an insider's view of the process. Depending on the level they select, they'll be our label, our sponsors, our A&R and sometimes, guest stars in our video and album."

At the first, ten-dollar "Trixie" level, donors will receive digital downloads of Telling on Trixie's second album. At $25, fans get an advance copy of the new CD and become a "Green Room" member. Green Room membership allows fans into the secure areas of the website…

where they will follow the band's progress for the entire twelve months, and participate in decision-making. Interim levels include: Groupie, V.I.P., Manager, Producer, and Rock Star levels, which have prizes that vary from free admission to shows, to merchandise, to recognition in the liner notes. For those willing to make a top-level, $10,000 donation — what Telling on Trixie brands the "Iconic Living Legend", the band will write and record for the album a song inspired by the fan, about a person or topic the fan chooses. In addition, the fan can star in the band's video, and be a Guest Artist on the album.

Telling on Trixie is a New York rock band whose music was recently described as "soulful, anthemic powerpop" by Cincinnati's City Beat. Their first two videos have played on 37 nationwide programs for millions of viewers, garnering them recognition as "Best of 2007" by MTV LOGO. Their music has been featured on MTV Real World, Road Rules and Gauntlet.