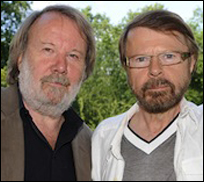 
The pair will team up with Swedish DJ and producer Avicii to compose a theme track for the event in Malmo, Sweden.


We Write the Story will be performed for the first time at the opening of the grand final on 18 May.


Sweden will be hosting the competition for the fifth time after pop singer Loreen won last year with Euphoria.


"We are extremely delighted to announce that Benny, Bjorn and Avicii have accepted to compose a unique piece of music for the 2013 Eurovision Song Contest," said executive producer Martin Osterdahl.


Abba are the most successful group to come out of the contest after winning with Waterloo in 1974.


It was Sweden's first Eurovision win and launched the country's most successful band.


Andersson and Ulvaeus, who made up half of Abba – alongside Agnetha Faltskog and Frida Lyngstad – said they agreed with host broadcaster SVT's "vision for the contest".


"This led us on to the assignment to collaborate with Avicii on a piece of mutual understanding and fellowship," they said, adding, "It's a lot of fun and very inspiring."


The collaboration is being hailed as a "union of two of Sweden's biggest musical exports".


"The collaboration between generations is extremely exciting," said Avicii's executive producer, Ash. — According to BBC