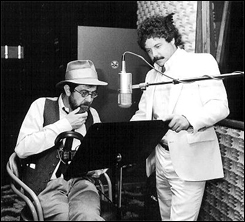 (CelebrityAccess MediaWire) — Billy Moore, who was the original “concert spot voice” of Tourdesign Creative Services, passed away on August 4th at his home just outside Englewood, Florida at the age of 62. Tourdesign, which opened in 1983, is one of two main providers of concert radio, television and print materials for promoters in North America.

Tourdesign COO/producer Jon Shults said, "Without Billy, we wouldn't be who we are. He started it all for us here and helped create a desire in many producers in North America to work on concert spots. It is a unique and fun job and Billy was the kickoff for the whole thing.”

“The launch of Tourdesign was on the shoulders of people like John Valant, Pete Saetre and Debby ‘Fergy’ Ferguson,” added Shults. “However, the product all centered around Billy and he did it like no other. He will be greatly missed.”

Former Tourdesign voice talent Nick Sommers said, “Billy was a great guy and such a gentle soul. We became great friends over the years and life won’t be the same without him.”

Billy used to work as the voice for such artists as Motley Crue, Ozzy Osbourne, Bon Jovi, Oak Ridge Boys and many others. After his departure from Tourdesign in the mid 80’s, Billy went on to voice many theatrical movie trailers, network promos, affiliate promos, radio station imaging and many commercials heard across the country.

Dave Lucas, the former ClearChannel Music CEO who now heads Live 360, founded Tourdesign in 1983. Billy was the signature sound that helped launch the company into a competitive status, bidding for production contracts for broadcast media.

"It's very sad and he’ll be missed," said Lucas.