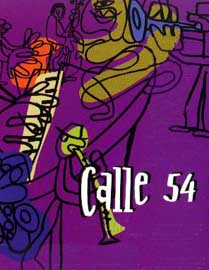 The Calle 54 concert tour brings together an amazing array of Latin-jazz legends. The concert is based upon the 2001 film Calle 54 released by Miramax, which documented the core of Latin Jazz with fluid camerawork and excellent artistry, winding the threads of Latin Jazz as it exists today. With an amazing bevy of those very same legends of Latin jazz, the concert will recreate both the themes of the film and the music captured brilliantly by the filmmakers. The core musicians are, Paquito D’Rivera, alto saxophone/clarinet; Diego Urcola, trumpet; Jerry Gonzalez, trumpet/percussion; Dave Valentin, flute; Mario Rivera, tenor saxophone;
Chano Dominguez, piano; Bebo Valdés, piano; Andy Gonzalez, bass; Horacio “Negro” Hernandez, drums; Dave Samuels, vibes; Giovanni Hidalgo, percussion; Raul Jaurena, bandoneon; and Eliane El­as, piano.

Instead of performing as one big group, each of the core musicians will perform two or three songs with their own groups, which should take about 90 minutes. Between the performances, portions of the movie will be projected on a screen, bringing together the music and the film in a stunning theatrical effect. Then the core musicians most-likely will perform in together in various combinations. In some markets, guest musicians like Michel Camilo and Gato Barbeiri will be added. There will be over 20 musicians on the tour.

The director of the film has been called in to direct the stage show. His plan is to place the music in a highly stylized setting. Theatrically presenting the show. He presented Celebrity Access with notes from the show.

The curtain opens; we have the scenery, designed by the renowned Spanish graphic artist Mariscal, a video screen (probably on the left) showing Tito Puente presenting his mural to the spectators, as if the show was starting at Tito’s Restaurant in Queens, New
York. In this context, Paquito will be presented, being the conductor of the show. It
starts with a version of "Panamericana" with his band; then, a course in South America,
stopping at Buenos Aires and Rio. From Brazil, it will go over to Spain, where Chano
will intervene with Paquito in one of the songs of the new record, and Chano and his
sextet will then introduce Jerry, returning to America. From there, the song "Air Dance"
(from the film) and another tune will be performed, opening the way for a small tribute
to Tito Puente, involving many of the musicians in the concert. It will then finish with
percussion: “Negro” Giovanni and Jerry Gonzalez; and then Bebo Valdés performs.
With Bebo, there will be a small format, such as a trio, and then Paquito will intervene,
to perform a song from Bebo’s record, finishing with a mythical song such as El
Manisero with the entire band.

This program will give the concertgoer a feeling that they have just taken a trip covering all
of the distance of the Atlantic: from El Caribe to Argentina, Spain, coming back to
America, via New York, finishing in El Caribe.

Booked by Eric Sanzen of Ted Kurland Associates, Calle 54 has dates available in United States in June and from late-September-October performing at performing arts centers. Calle 54 will hit the European jazz festivals in July.

"This tour has all the Latin jazz greats on the stage at one time," says Sanzen. "It was a brilliant film. Having all these brilliant musicians performing on the stage will be an historical event."