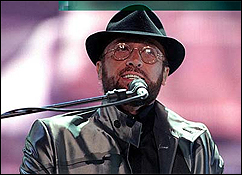 Clear Channel Entertainment Television (CCETV) plans to participate in a multi-platform media project that will pay tribute and celebrate the life of Maurice Gibb, organized by Robin Gibb, both of whom were members Bee Gees. All activities will revolve around the special tribute album, produced by Kenneth "Babyface" Edmonds, planned for a major release in June.

Clear Channel Entertainment TV's plans include producing a television show from a live tribute concert featuring top music artists performing some of the Bee Gees' #1 hit songs in addition to a behind-the-scenes television series and DVD releases of both.

In memory of the untimely death of Robin's twin brother, Maurice, the project will recognize his life and his impact on fans and music the world over. The tribute concert, being held in conjunction with the CD release will be broadcast live on a major television network. Artists performing on the CD include Paul McCartney, Snoop Dogg, Sheryl Crow, Black Eyed Peas, Wyclef Jean, Beyonce, Leann Rimes, Eric Clapton and Rascal Flatts. It is hoped that many will participate in the proposed concert. Notable charitable entities will be beneficiaries of the event.

The "making of" television series is already being shot as the artists and producers are in the planning, recording and mixing stages of the tribute album. The episodes will document the making of the album and live concert and will include exclusive interviews with the recording artists. Each show will lead up to the finale which showcases the actual live concert. In conjunction with the television series, CCETV will also release a DVD to include all episodes of the series as well as the broadcast of the concert performances.

"This project brings yet another dimension to the hugely successful Bee Gees history and is a part of the vision which Robin has for keeping Maurice's–and the Bee Gees'–legacy alive to fans new and old," says Steve Sterling, senior vice president of CCETV. "We are proud to be playing a part in this grand plan."

John Campbell, under the GC Management banner, in which he is partnered with Gibb co-manager Ken Graydon, adds, "Robin Gibb and the Bee Gees have been recognized around the world for decades, and now both their long-time fans, and new ones, will celebrate their music through a whole new variety of media distribution, capturing the urban, hip hop, country and pop genres of today." –Bob Grossweiner and Jane Cohen