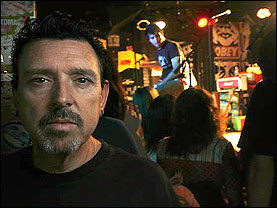 ANAHEIM (CelebrityAccess MediaWire) — Below a "No crowd surfing" sign, a preteen with a 2-foot-high Afro is vehemently strumming a wicked air guitar. His mound of hair bounces in front of the stage, barely visible over the crowd of hipsters wearing retro fanny packs and purposefully ripped black jeans. The Afro disappears into a sea of thrashing, sweaty kids as the band launches into a thunderous mishmash of rock and punk.

This is the scene at Chain Reaction, where 1,500 music fans pack the all-ages Anaheim music venue in an average week. A half-hour line snakes around the parking lot on nights when bands like Yellowcard and Thrice play sold-out shows.

It's a decidedly successful state of affairs for owner Tim Hill, a 47-year-old Maywood native who wasn't even sure the club would last a year when he opened the doors.

The businessman had no experience in the music industry when he helped start the club 10 years ago. Everyone around him thought he was nuts – especially his wife – but he opened it anyway.

"I just agreed and figured our lives would go back to normal after six months," Brenda Hill said.

Chain Reaction has a clamp on the all-ages Orange County music market and a reputation as a venue where up-and-coming bands make their mark. Dashboard Confessional, New Found Glory and Angels & Airwaves have all played there. Thrice and Atreyu started their careers there and went on to break out internationally.

Kids count on the club to book the latest underground bands and to nurture local talent.

"A lot of people will see a band's name and say, 'I've never heard of them,' and write it off," Hill said. "And then the next day they send me e-mails asking, 'Who was that amazing band that played last night?' "

In 1996, Hill was running his profitable Santa Fe Springs electrical wiring business when a friend persuaded him to dump some money into a club venture. After the venue had tanked for three months, Hill bought the friend out for $10,000 and started putting on punk and metal shows. He hemorrhaged money for five years.

"I always tell people that it takes a lot of money, and you can't need any money, because anything we made went back into improving the club," he said.

The former Mexican restaurant site now serves up the latest indie, hard-core, emo and punk music with a sloppy side of artistic perspiration. And that's pretty much all it serves. You won't find alcohol at the snack bar – only slushies and a pedestrian selection of sodas, chips and candy.

Chain Reaction was always meant to be an all-ages, sober venue, Hill said. His good relationship with the city of Anaheim means that it probably wouldn't have been hard to get a liquor license, but he chose to tailor the club to kids who didn't have a place to hang out.

"That's why my Web site is allages.com," he said. "This is a place for music. Alcohol really presents so many extra problems, anyway."

Hill still spends money on security personnel and video surveillance. He even patrols the parking lot himself to make sure kids aren't drinking or causing trouble.

The Police Department has received only two complaints about the club in the past two years, and those were isolated noise complaints.

"It isn't even a blip on our radar," Anaheim police Sgt. Rick Martinez said.

That means no crime, no tension with the neighbors, nothing.

"My mom just drops us off now," said Jason Trinkle, 13, of Anaheim, who visited the venue to see the band Action Action. "She used to come inside … but she doesn't like the music and it's safe, so she lets us do our thing."

Chain Reaction is the scruffy, hipster uncle of the O.C. music scene. House of Blues Anaheim books the midsize tours and the reunion acts (see Cheap Trick), while the big artists settle for cavernous venues like Angel Stadium and the Honda Center. The Coach House in San Juan Capistrano is too far to drive for most fans. The Galaxy Theatre in Santa Ana is a midsize venue for a more mature, over-21 crowd.

Live-music junkies talk about Chain Reaction as if it were a sacred place, chosen by the rock gods for worship of all things loud. In Orange County, the scene is blooming on the shoulders of this dinky place in the middle of Mickey land.

Fans regularly drive from Arizona, Nevada and the Northwest to catch bands at Chain Reaction that don't always play in other cities, Hill said. He says he's met some fans from as far as New Jersey, Hawaii and Florida.

"It's the atmosphere that's so awesome," said 15-year-old Jamie Wilkerson of Rowland Heights. "I can't get into House of Blues without my mom, and I can't go to a bar to see a band, so I come here with my friends and no one gives us a hard time."

There are some rotten apples that get kicked out, Hill said, but when he goes to bars, he realizes how lucky he is to have a young, sober crowd.

"These punk kids may dress funny, but they're mostly good kids with good hearts," Hill said. "There's a lot of heart and soul in this place."