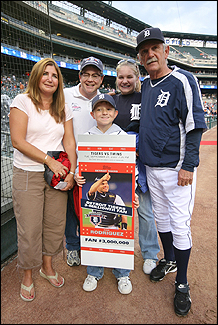 DETROIT, MI (CelebrityAccess MediaWire) — The Detroit Tigers on Tuesday night surpassed the 3,000,000 mark in tickets sold for the season for the first time in the history of the franchise.

Charlie Woody, 10, from Plymouth, MI, was randomly selected by the club to represent all Tigers fans for the record-setting attendance mark. Woody, who was attending the game with his father Kent, mother Korina and sister Bess, was greeted by Tigers Senior Vice President, Business Operations, Duane McLean, and members of the front office staff upon entry through Gate A at Comerica Park.


In addition to prizes which included a 27-game season ticket plan with four seats for 2008, Woody was escorted to the field and received a framed Tigers jersey with “3 Million” on its back from team President, CEO & General Manager David Dombrowski.


“This milestone provides everyone in the Tigers’ organization the opportunity to say thank you to our fans for their tremendous support,” Dombrowski said. “Detroit is a great baseball city and we appreciate the loyalty and passion for this team from all Tigers fans.”


The framed jersey presented to Charlie Woody included a plate inscribed with the following information:


Presented in honor of the three millionth fan of the 2007 Detroit Tigers season. On behalf of the Detroit Tigers organization, in recognition and appreciation of all Detroit Tigers fans. –by CelebrityAccess Staff Writers