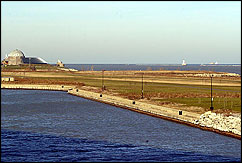 CHICAGO (CelebrityAccess MediaWire) — The Chicago Park District’s annual take from the temporary amphitheater at Northerly Island, the former site of Meigs Field, will topple their original goal of $800,000 in its first season.

With predictions reaching up to $1.4 million before the season has even begun, officials are very pleased.

“The expected revenue here will far exceed $1 million a year,” Jim Chronis, district COO of the Chicago Park District, told the Chicago Tribune. Chronis made the projection at a meeting of the district’s board of commissioners, which approved a nearly complete draft of the contract with Clear Channel Entertainment.

The contract with CCE will be for three years, with two options for one-year extensions.

When district Gen. Supt. Timothy Mitchell first announced the amphitheater, he set a revenue goal of $800,000, expecting to cover the cost of maintaining Northerly Island and planning to convert the 78-acre peninsula into a nature park.

The bulk of the incoming revenue will come from parking at the underground garage at Soldier Field. The district will also receive $225,000 guaranteed annual payment and 75 cents on every ticket sold, which would top $113,000 of all of this year’s events are 90-percent sold out. Starting in 2007, a $25,000 bonus would also be paid to the district if attendance tops 200,000. If attendance reaches 225,000, the district would receive an additional $25,000.

Twenty to twenty-one concerts and family events are expected at the venue this summer, kicking off with a Chicago and Earth, Wind & Fire show on June 24. –by CelebrityAccess Staff Writers