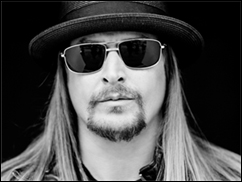 DETROIT (CelebrityAccess) — The choice of Kid Rock as the opening act for a new sports arena in the largely African-American city of Detroit has drawn criticism from civil rights groups over the artist's long use of the Confederate flag, criticism of NFL quarterback Colin Kaepernick, and Rock's vocal support of President Trump.

The request to cancel Kid Rock's six performances to open Little Caesars Arena came from the National Action Network's Detroit chapter, which announced plans for a protest next week.

"This is the straw that broke the camel's back," Rev. Charles Williams II, president of the network's Detroit chapter said per ABC News. "When you hire Kid Rock, who is known to be dog-whistling and cat-calling to white supremacist organizations and the white supremacist community, alt-right, whatever you want to call them, and you take our tax dollars to do that? That's wrong."

Rock has never backed away from such controversy and has used Confederate flag icon both on stage and on his merchandise, despite past criticism. In 2015, he told Fox's Megyn Kelly, "Please tell the people who are protesting to kiss my ass/Ask me some questions."

Rock also drew the ire of civil rights groups for his criticism of NFL quarterback Colin Kaepernick after Kaepernick refused to stand during the national anthem while with the San Francisco 49ers last year in protest of police violence and social injustice. During a concert in Michigan on Wednesday night, Rock took the opportunity to make a profanity laden speech decrying people who suggested he was a racist and lambasted Kaepernick and others who use the national anthem for protest.

"Football's about ready to start," Rock said according to 11Alive.com. "You know what? [expletive] Colin Kaepernick."

Kid Rock's publicist, Kirt Webster, did not immediately provide a comment to ABC News on Wednesday.