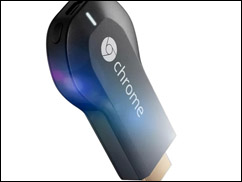 SAN FRANCISCO (Hypebot) – The reviews continue to roll in, but consumers have already voted on Google Chromecast, a $35 HDMI dongle that streams video and music from any device that can run the Google Chrome browser (including Apple iOS devices), as well as Android apps with built-in Chromecast capabilities.

They already know they want Chromecast, no matter what the reviewers say — and they mostly love it too.

So many people have snapped up this device that it is no longer available anywhere online — all three official retailers have been sold out for at least the past four days, with Google promising to fill orders in 3-4 weeks. This is almost certainly not an artificial shortage created by Google to drum up more demand, either, as Digital Trends notes, because just about every brick-and-mortar Best Buy in the country is sold out of all units as well.

The Chromecast phenomenon is about two things: “cord cutting” and price. For people who already watch “television” by connecting their laptop to it and entering a Netflix password, buying Chromecast is a no-brainer: It means they can stay on the couch. But even people who pay for cable and satellite cannot, apparently, resist the allure of a $35 device that puts anything the Chrome web browser sees or hears on the big screen.

However, as we noted in a widely-circulated article last week, there’s one big problem with Chromecast where music fans are concerned: It sends music to the television, which is probably not where you want it to be. Yes, you can usually route the music out of your television’s audio outputs and into some speakers, but this is nowhere near as simple as Apple’s solution, AirPlay, which “just works” without a television — and now, thanks to so many manufacturers integrating it directly into speakers, without even an AirPort Express or Apple TV.

Google cannot help but notice how fast Chromecast is flying off shelves, revealing that there was a massive, pent-up demand for an inexpensive way to send video from Google’s browser and devices to the home. Could this be the catalyst that makes Google think seriously, for the first time, about wireless audio in the home — something that currently drives potential Android users into the arms of Apple (because Android actually works with AirPlay)?

Google, which has leveraged its search dominance to become a major player in email, news, video, music, and other areas of life, has had a series of false starts involving wireless music in the home:

Google Fling: This wireless protocol was supposed to let people “fling” video, websites, music, and other content onto their television. Has anyone ever used it? We felt like Google missed a big opportunity to open-source it and do an end-run around Apple AirPlay.

Google Nexus Q: This $300 device let you send music all over the house, among other things. It sort of bombed, and Google doesn’t sell it anymore. It’s possible that Google learned the lesson that people want something super-cheap for networking their media right around this time, leading to…

Google Chromecast: This $35 smash hit, so far anyway, looks awesome for video, but not so much for audio.

The stage is set for Google to release a music version of Chromecast — let’s call it Chromecast Music — which could even be a regular Chromecast with a high-quality audio output, but ideally would plug straight into stereo systems with no screen required, just like Apple’s Airport Express. With that, Google would lay the foundation for speaker manufacturers to include not only AirPlay, but Chromecast as well, or maybe even to include Chromecast instead of AirPlay.

Google has the resources, the mobile platform, the music locker, the subscription service, and now, in Chromecast, it has a hot new brand that people can’t seem to get enough of.

Would a “Chromecast for Music” device succeed where Fling and Nexus Q failed? Hopefully, for music fans with Androids, Google will bother finding out.