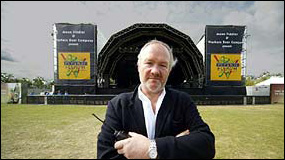 LONDON (CelebrityAccess MediaWire) – According to BizWorld Clear Channel has teamed up with Irish concert promoter MCD Entertainment, the company owned by Denis Desmond and his wife Caroline Downey, a former model, revealed that they had been discussing the purchase of 21.5 million Mean Fiddler shares, representing a 34.9 per cent stake.

They are proposing to buy the 35pc stake in Mean Fiddler held by its founder Vince Power.
They have made a preliminary offer of 60p a share through their jointly held vehicle Hamsard, while reserving the right to bid for less than that price.

A bid by Desmond has been expected for some time, but his decision to team up with Clear Channel is a surprise.

The US group, which had sales of USD 9.4bn last year, runs entertainment venues, radio stations and outdoor advertising sites.

It already owns, operates or books 28 entertainment venues in the UK.

With Desmond's MCD already holding 24.3pc of the London-based Mean Fiddler operation, success would give the partners control of almost 60pc of its equity.

Mean Fiddler owns a string of UK music venues such as the Astoria in London, the Reading rock festival and 34pc of the Glastonbury rock festival.

Hamsard has been in talks with Mean Fiddler since January.