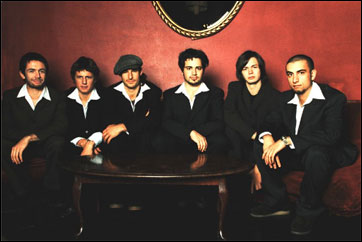 (CelebrityAccess MediaWire) — Australian eclectic jam-rock group The
Cat Empire will be bringing their raucous body-shaking show to North
America for a late spring and early summer tour. The Cat Empire have
quickly grown to become one of the strongest festival headliners in Australia.

The group describes their live show as "Where the hip-hop community
dance to gypsy, the jazz purists jump to hip-hop, the Latinos bop to
reggae, the rastas shake to latin, the elderly sweat to funk, the youth
swing to dancehall, and everyone wakes up a little happier!"

The Cat Empire's self-titled debut has achieved multi-platinum status,
and was nominated for every major ARIA Award in 2004 (Australia's
equivalent to the Grammys) including Best Group, Best Album,
Breakthrough Artist and Breakthrough Album, Best Song, Best Producer and
Engineer.

On a recent tour, the group got the chance to support the Godfather of
Soul, James Brown.

“We love touring in the USA” said front man Harry Angus. “Some of our best tour stories have come out of times we have had in the USA, and we are really only getting started there.”

Asked what fans in the USA can expect from their planned tour, Angus replied “the people who come to our shows are about to learn the true meaning of LIVE music, music which makes you dance, jump around, sing along and laugh out loud. We also promise some subtlety as well!”

Starting as a trio in 1999, Ollie McGill played the Rhodes, Felix Riebl
covered the timbales, and Ryan Monro took double bass. Playing every
show they could get their hands on, from Mormon weddings to staff
parties according to their website, the group gained fans of all kinds.
They soon graduated to jazz clubs and all-night lockout parties, earning
a fanbase in all major jazz players throughout Australia.

Over the years, the group took in more members, eventually becoming
their full-strength team of six official members, along with a three
member horn section, and even a three member dance group.

Jordan Burger of the Agency Group Ltd. booked the nationwide tour.
“The Cat Empire have amassed such a tremendous following all over the world
from their incredible live performances and I'm really excited to be
working with them and to finally be able to bring them over to the States,” said Burger.
“There have been a great many fans waiting a long time for this tour of
America to finally happen, and they are all jumping up and asking how they
can help. They put on such a great show, and its bands like the Cat Empire
and fans like theirs that make it all worthwhile.”

Mike Luba, who has booked bands such as The String Cheese Incident and Spearhead alongside The Cat Empire, commented: “The Cat Empire is one of the best bands I've seen in a long time. They are awesome live, write great songs and are genuinely nice guys. Australia is producing so much good music – Xavier Rudd, The Waifs, John Butler – The Cat Empire can hold their own against anyone."

Having headlined every major Australian festival over the last few
years, The Cat Empire is poised to take the US by storm, playing various
festival and headlining dates. The group plans to return to the states
again in October to play a run of college dates.