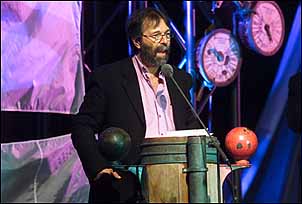 "We're going to find artists and work on all aspects of
their careers from within one office, with them basically
controlling their destiny and not a whole lot of people
fighting over it," said Cohl.

While Cohl wouldn't elaborate on who he
might be working with, or what the full package
might entail, he did mention recording, TV and touring as
components of what Grand Entertainment will be
involved in.

"I don't think it simplifies things. It
complicates things in some respects because it forces the
artist to
pay more attention and forces them to be more involved in what
they're doing and to make them look at
everything they do as one."

Cohl says that since he sold his
company to Clear Channel Entertainment (then
SFX) in 1998, he's been obligated to work as a consultant for
"up to two hours a week" for the live
entertainment and U.S. radio and advertising giant. He says
that despite Clear Channel's clout, there's room for
competition.

"Obviously they're big and powerful and dynamic,
but at the end of the day they don't make the
decisions for the artists and don't control the artists or the
music. They control the venues. So it would be tough
to take them on. But I think there's still lots of room in the
business, and that's why we're starting Grand
Entertainment. I'm quite confident that what's really lacking
in terms of the competition to Clear Channel is new,
innovative, young and aggressive ideas and people."

Cohl also
said he was truly surprised by the depth of the
video tribute that was assembled in his honour for the evening.
'The only thing that didn't surprise me was Keith
(Richards), because I was with him in Paris two weeks ago and
he didn't realize the tribute hadn't taken place
yet. We were having dinner and he said, 'Boy, did I ever get
you good on the Juno Awards, eh? I just let him spill it and then said, 'Keith, it's not until April 13th."