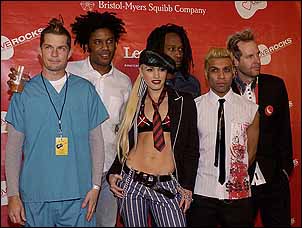 No Doubt has postponed it concert dates in Pittsburgh and Cleveland because
singer Gwen Stefani is "really sick." On the group's official website, she explained:
"I've been really sick for about two weeks and still playing the shows so I
haven't been able to get better. I have been forced to take a few days off to recover
so we can hopefully do the rest of the US tour. I am doing everything I can to get
better and hopefully I will be back to normal, booger free, and ready for you to
rock me again soon."

In other news, the band is warning their fans to be on the lookout for fake
backstage passes that are being sold in their tour
markets before the band gets to town. A copy of the pass is posted on their
website. "If you come across one of these, don't be fooled by it," the post says.
"We apologize to anyone that has been defrauded by these people and just want to
warn everyone else."