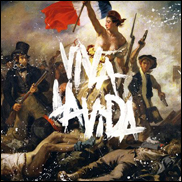 Coldplay has a history of setting digital sales records. Viva La Vida (Capitol), its most recent album, is the top-selling digital album in SoundScan history while 2005’s X&Y was the first digital album available for pre-order. After the release of X&Y, Coldplay became the first artist to sell one million digital tracks in the U.S.

Coldplay’s sales milestone of more than 2 million full digital albums includes the download sales of four of the band’s complete studio albums, a live album and a full-length EP, and is not calculated on the track equivalent basis (TEA) that SoundScan uses to calculate its digital album chart.


The video for “Strawberry Swing,” Coldplay’s next single, will premiere on Monday, July 20th, on http://www.babelgum.com. The groundbreaking short film was directed by visual artists Shynola and features vocalist Chris Martin as an animated superhero in a chalk-drawn world.