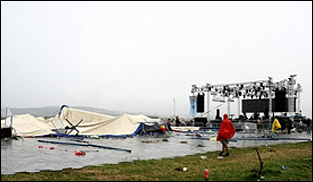 TRENCIN, Slovakia (VIP-NEWS) — One person has died after a giant tent collapsed on a crowd of concert goers at Slovakia's biggest music festival, reports say.


Another 40 were injured – 15 seriously – when a gust of wind lifted and then brought down the tent during a rain storm in the western town of Trencin.


Organizers cancelled the Pohoda festival, which was attended by more than 30,000 music fans.


One report said the accident victim was a young boy.


Mario Gesvantner, a spokesman for the organizers, said weather forecasts had not warned of severe storms.