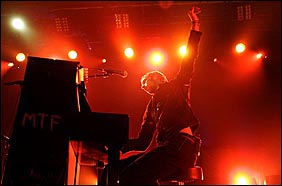 NEW YORK (CelebrityAccess MediaWire) — Coldplay has announced that the upcoming US leg of their tour has been pushed back, due to what the band claims were production problems.

In a statement on the band's website, they wrote: "We're very sorry, but unfortunately Coldplay have had to move the dates of some of the previously-announced US shows. The band have experienced some production delays which mean that the show simply won't be ready for June 29. It's very frustrating but they promise you a show worthy of your patience and understanding when they start in mid-July. All tickets remain valid, but refunds will be available from the point of purchase if you're unable to make it to the new date."

The Brit alt-rock outfit is prepping to tour in support of their latest release: "Viva la Vida or Death and All His Friends." Set to drop on June 12th in the UK and June 17 in North America, the album features the production work of the inimitable Brian Eno.

The first two singles have been released and are available on Apple's iTunes exclusively. One of the two tracks, "Viva la Vida," was featured in a television commercial and with more than 220,000 downloads, has broken the presales record for the music vendor, a title previously held by Jack Johnson's "Sleep through the static."