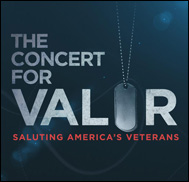 WASHINGTON D.C. (CelebrityAccess) — Music was front and center in the nation's capital as the city played host to the Concert For Valor at the National Mall on Tuesday night.

Held to raise funds and boost awareness of veterans charities and to support our active troops, the concert featured performances by Rihanna, Carrie Underwood, Dave Grohl, Bruce Springsteen, Eminem, Metallica, The Black Keys and numerous others.

The concert was broadcast live via HBO, who temporarily slipped the surly bonds of their premium only business model, making the channel accessible to anyone with a participating cable system.

The concert spurred significant traffic to the charitable organizations such as Semper Fi and Give An Hour that it was supporting, with the Washington Post reporting that Semper Fi had received $60,000 by night’s end. Give an Hour, which provides veterans with free mental health services, reported that they had received 60 times more money on Tuesday than it typically does.

“Because we don’t advertise, many people don’t know about us,” Wendy Lethin, vice president of community outreach for Semper Fi Fund, told the Washington Post. “To have that sort of exposure from someone who is so highly thought of, there’s no doubt it gives us credibility.” – Staff Writers