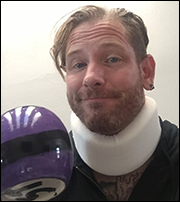 NEW HAVEN, CT (CelebrityAccess) — Slipknot has been forced to postpone most of their June concerts on their co-headlining US Tour with Marilyn Manson after the band's frontman Corey Taylor underwent emergency surgery on his spine.

On Twitter, Taylor revealed that he had broken his neck without realizing it and required emergency surgery to replace two discs.

"Regretfully, I’m sending this to our fans to inform you that we will be postponing the first couple of weeks of our upcoming U.S tour. Unfortunately, I had to undergo an unplanned spinal surgery. I am recovering nicely, and all went well!"

Taylor subsequently tweeted photos of himself after the surgery, smiling broadly, but in a large neck brace.

At present, the band is set to resume their tour on June 28th in Nashville. Corey said that the band would be rescheduling affected dates in August. – Staff Writers