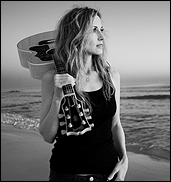 Wright came out with a cover story in a recent "People" magazine, where she said that nothing in her life has been more magical than the moment she decided to reveal her sexuality.

Coincidentally, Wright also happened to have her memoir "Like Me" and her latest album "Lifted off the Ground" hit the store shelves this week.

Openly gay artist k.d. lang was active in country music during the 1980s, but didn't come out publicly until the 1990s, when she had shifted her focus to pop music.

Wright's revelation about her sexuality and her concordant challenge to the heterosexual conservative paradigm of mainstream country music comes in the wake of a similar move by Christian artist Jennifer Knapp, who also came out publicly as a lesbian several weeks ago. Knapp's revelation has been met with mixed emotions by her fans and while some have supported her honesty, others have called for a boycott of her music. – CelebrityAccess Staff Writers