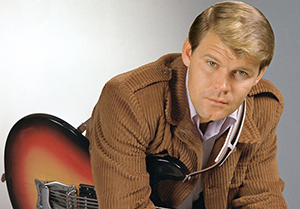 (CelebrityAccess) — Country legend Glen Campbell, the honey-voiced artist behind hits such as "Wichita Lineman" and "By the Time I Get to Phoenix," died Tuesday. He was 81.

Campbell's death was confirmed in a message posted on his official website: "It is with the heaviest of hearts that we announce the passing of our beloved husband, father, grandfather, and legendary singer and guitarist, Glen Travis Campbell, at the age of 81, following his long and courageous battle with Alzheimer's disease."

During a career that spanned six decades, Campbell sold 45 million records, including 12 RIAA Gold albums, four Platinum albums, and one Double-platinum album. Eighty of Campbell's songs charted on Billboard, including their Country Chart, Hot 100, or the Adult Contemporary Chart, including 29 top 10 hits and 9 #1 hits.

Campbell's contributions to country music were also recognized with 10 Grammy Awards (four from 1967 alone), as well as 10 ACM Awards and is a member of the Country Music Hall of Fame.

Born in Billstown, Arkansas, Campbell dropped out of high school to pursue a career in music, moving to Albuquerque in 1954 to join his uncle's band Dick Bills and the Sandia Mountain Boys.

In 1960, Campbell made his way to Los Angeles, where he became part of a group of professional session musicians known as the Wrecking Crew who appeared on studio recordings for artists ranging from Willie Nelson to Dizzy Gillespie. During this time, Campbell also pursued his own career, performing briefly with the Champs before signing solo recording contracts, first with Crest Records and then, in 1962, Capitol Records and in 1966, scored his first major solo hit with the single "Burning Bridges" in 1967.

Campbell continued to score hits through the late 1960s and early 1970s, riding the crest of the so-called "Countrypolitan Sound" that would prefigure much of modern country-pop music.

Campbell hosted his own weekly variety show on CBS, The Glen Campbell Goodtime Hour, from January 1969 through June 1972. Campbell parlayed his session player connections into hosting some of the top names in music on the program, including The Beatles, Bread, The Monkees, Neil Diamond, Linda Ronstadt, Johnny Cash, Merle Haggard, Willie Nelson, Waylon Jennings, Roger Miller, and Mel Tillis.

In 2011, Campbell was diagnosed with Alzheimer's and launched a farewell tour with family and friends, performing his final concert on November 30th, 2012 in Napa, California. Following the tour, Campbell recorded what would be his final album, "Adios" which was released in June of this year, peaking at #7 on the Billboard Country Chart.

Two pieces of trivia about Campbell: he was a touring member of the Beach Boys, filling in for Brian Wilson from 1964 to 1965, and he gave country star Alan Jackson his first big break after he hired Jackson to work for Campbell's music publishing business Seventh Son Music.

In lieu of flowers, donations can be made to the Glen Campbell Memorial Fund at BrightFocus Foundation through the CareLiving.org donation page.