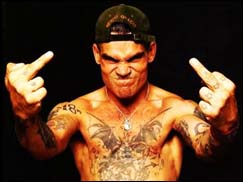 NEW YORK (CelebrityAccess MediaWire) — A performance by hard-core punk rockers the Cro-Mags at Webster Hall on Friday, was interrupted when a former founding member of the group attacked them with a knife.


According to the New York Times, the crowd was waiting for the Cro-Mags to take the stage when Harley Flanagan, a former bassist and founding member of the band, was allegedly seen to dart out of the dressing room, yelling something unintelligible, according to a spectator, Elie Perler, 30. Almost immediately thereafter, a security guard yelled “Get his hands,” and “He has a knife,” as a security team converged on Flanagan, and restrained him.


Shortly thereafter, the band's current bassist, Michael Couls emerged from the dressing room, pressing a bandage against his chest. A subsequent police report said that Flanagan allegedly slashed Couls' arm and side with a knife and then bit and slashed a second person who tried to intervene. None of the injuries proved to be life-threatening.


The show, a part of the CBGB festival and also featuring Sick of It All and Vision of Disorder and a part of the first, was canceled after the attack after police ordered the audience to clear the building.


"We are saddened to learn about the events that occurred last night at Webster Hall," a spokesman for the festival said on Saturday.


Flanagan has reportedly been at odds with the band since leaving the group in 2000 and not being allowed to rejoin. Since then, Flanagan has engaged in a seemingly vitriolic debate with three other members of the band in various media outlets, both in the web and in print, with Flanagan alleging that the band was stealing from him. In 2003, Flanagan’s new band, Flanagan’s War released an album titled “Cro-Mags.” – CelebrityAccess Staff Writers