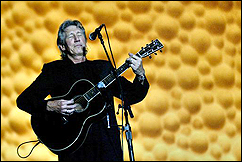 The iconic musician's tour took him to the Wachovia Center where he performed the entire Pink Floyd album "Dark Side of the Moon" concept album at the end of a two act show as part a sold-out 2 night stand at the Wachovia.

Rogers, the lyricist and bassist for Pink Floyd was, by all accounts, in full effect, playing with numerous musicians who re-created the complex musical tapestry of Pink Floyd's music.

The first act featured selections from numerous Pink Floyd releases, including the seminal album "The Wall" as well as the aforementioned "Dark Side of the Moon."

As Jonathan Valania, reviewer for the Philadelphia Inquirer described the event "bombast, pathos, and mystic, all melded together. In a word: Wow." – CelebrityAccess Staff Writers