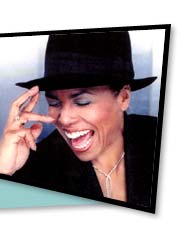 Touted by the Village Voice as "the most capable jazz singer of her generation," Bridgewater's credits include work in radio, film and theater. In 1997, the dynamic artist earned two Grammys for her self-produced Verve CD, Dear Ella, dedicated to singer Ella Fitzgerald. Her most recent CD, Live at Yoshi's (Verve), was also nominated for a 2000 Grammy for "Best Jazz Vocal Album."

Her latest muse has emanated from the oeuvre of Kurt Weill, whose theatrical leanings caused her to think big, as big as arranging for a nine-piece band. Her new album, This is New (Verve), will be released in the US in late May 2002. While she is touring constantly with her trio, her Nonet tour will hit North America between Sept. 26 and Nov. 17, 2002.