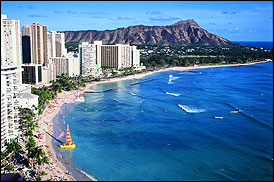 HONOLULU, HI (CelebrityAccess MediaWire) — The Diamond Head Crater Festival scheduled for April 22, 2006, will be the first musical event inside the historic crater-made venue since 1988. The moratorium has been lifted on the legendary venue and music will soon erupt from the unique setting, according to CEO, Ron Gibson. The festival will follow a 5-day “Technology Meets Music” industry conference.

"We are excited to create a high-profile, statewide, annual international event that will showcase Hawaiian culture and Hawaii's artists alongside many of the world's greatest performers. We believe this event will have huge appeal to leisure travelers, the world music industry and the local community as well" said Gibson.

Since receiving approval by the Board of Land and Natural Resources to use Diamond Head State Monument for a one-day signature event inside the Crater on Saturday, April 22, Gibson has been planning a Crater Festival with the first music concert in the Diamond Head Crater since 1978. Towards that end, he has been negotiating with top artist managers and solidifying relationships with Hawaiian artists.

The last performance at the crater, Tina Turner’s private concert for 2,000 Pepsi-Cola bottlers in 1988, was the last event of its kind in the venue. Her performance ended 18 years of concerts that started with the first festival on Jan. 1, 1970. About 12,000 people attended that one, with Hawaiian slack-key, rock music and hippie-oriented paraphernalia dotting the festival and "2001: A Space Odyssey" theme launching the celebration.

Over the next two decades crowds swelled to 75,000 at crater events. Artists that had performed in the crater during the 1970s include Yvonne Elliman, Santana, Fleetwood Mac, Steve Miller, Linda Ronstadt, Boz Scaggs, and Buddy Miles, intermixed with resident jazz, classic, hula and other performing artists.

Gibson and his team are exploring options with music celebrities looking to establish an annual "signature event,” such as Neil Young's Bridge Concert, and anticipates cooperation from talent and management alike who feel the magic of this unique setting.

The Diamond Head International Music Festival and Conference will be a "coming of age" event to complement Hawaii's new Grammy Award. The conference, called "Technology Meets Music," will be a global forum dealing with realistic issues including subjects such as digital rights management, streaming media capabilities, gaming and music, publishing issues, touring in the new world and radio now: AM FM/internet/satellite/cable, etc., to name a few.

“Music is big business, and Hawaii can be in the forefront of an international audience through not only concerts, but also roundtable discussions, workshops, exhibits, a music marketplace and a sharing of information. This also gives Hawaii the opportunity to showcase great venues and artists. In short, we want this to be a 'must attend' event for those in the global music industry and a wonderful attraction for Hawaii music lovers," Gibson said.

In the festival’s inaugural voyage next year, Gibson said he deliberately planned to scale down the operations in part to lessen the burden on the site and the residents in neighboring communities of Kahala, Diamond Head, Kapahulu and Kaimuki. He declined to reveal an operating budget but said "this will be a seven-figure event."

"We will be shuttling folks by buses into the crater, and by restricting the size of the audience, it's very doable for us," he said. "The problems of the past were mostly outside the crater and largely had to do with traffic."

The exclusivity is generating a buzz in the entertainment industry.

Gibson is a dual Hawaii-California resident who brings more than 30 years’ experience in various aspects of the entertainment business to his position with Integrated Outsource Marketing (IOM), where he is CEO as well. IOM has delivered results for a diversified client roster, including Northstar-at-Tahoe, the San Francisco Chronicle, Harrah's Resort Casinos, and Lincoln-Mercury. Gibson is also co-executive producer of The California Music Awards, a 27-year old signature event.

He produced concerts earlier in his career, having a partnership with promoter Ken Rosene for events at the Blaisdell Arena, Andrews Amphitheatre and Aloha Stadium. Mr. Gibson also pioneered computerized ticketing in Hawaii. –by CelebrityAccess Staff Writers