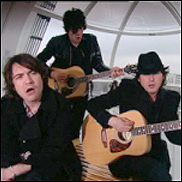 LONDON (VIP-NEWS) — Dirty Pretty Things have split up after three years together.

The four-piece, who were formed out of the ashes of The Libertines, said in a statement that they would be pursuing other projects.

But they stressed that despite the split, The Libertines would not be reforming.

They said: "It is with sadness we announce the farewell of Dirty Pretty Things. It's been a great three years, but time for us to try new things."

The four-piece said they will still play a month long UK tour which kicks off on 4 October.

They added: "We are reluctant to give up touring but will give the last waltz everything we have and are determined to go out as we came in, after which we all have other ventures to be getting on with and splendid future plans.

"Heartfelt thanks to all who made it what it was, much love and we'll see you on the road."

The band were formed in September 2005 with ex-Libertines drummer Gary Powell and guitarist Anthony Rossomando, who played with The Libertines following Pete Doherty's departure in 2004.

They scored their first hit single with Bang Bang You're Dead. It reached number five in the UK singles chart in April 2006.

The band released two albums during their career. Their debut Waterloo To Anywhere came out in September 2006 and Romance At Short Notice was released earlier in the summer. According to BBC