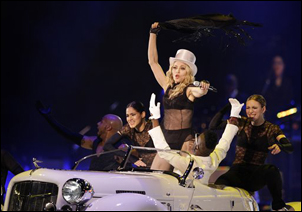 NEW YORK, NY (CelebrityAccess MediaWire) — Following one of the most successful runs in European concert history, Madonna returns to the U.S. for the start of her Sticky & Sweet Tour with five sold out shows in the New York area. The Sticky & Sweet Tour is scheduled to open October 4th at New Jersey's Izod Arena with four Madison Square Garden dates to follow on October 6, 7, 11 and 12, it was confirmed today by Live Nation.

"Now that I've warmed up in Europe, I'm ready to come home and do the show for my U.S. fans," remarked Madonna about her tour that includes 3500 wardrobe elements, 36 clothing designers, 100 pairs of kneepads, 12 trampolines, 69 guitars, a travelling personnel of 250, five keyboards for Kevin Antunes the musical director, three members of the Russian Romani (Gypsy) group the Kolpakov Trio, 18 dancers, one set of Swavorski crystal encrusted ear phones and one Material Girl.

Some of the rave reviews thus far: "In the premiere league of song-and-dance spectaculars, the queen of pop remains unrivalled and undefeated" raved the London Times. "Those who took in this spectacular opening to Madonna's world tour have seen anything as slick, innovative and energetic in recent months, then please point it out. The choreography, visuals and live talent were world class and mind-blowingly well executed, intelligent and witty" glowed The Independent (UK).

Following the NY area performances, The Sticky & Sweet Tour is scheduled to play multiple dates in North America including Boston, Toronto, Montreal, Chicago, Oakland and Denver before wrapping up in Miami on November 26th.

The tour then travels to Mexico City where the scheduled November 29th and 30th shows sold 100,000 tickets in just three hours. The South American leg of the Sticky & Sweet Tour has had a phenomenal response as well. With three shows and over 210,000 tickets already sold, a fourth performance was just added on December 3rd in Buenos Aires, followed by sold out performances in Santiago December 10 and 11, Rio De Janeiro on December 14 and 15 and Sao Paulo December l8, 20 and 21 due to unprecedented demand.

Madonna's current CD "Hard Candy" debuted at No. 1 in over 33 countries.