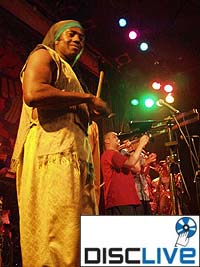 DiscLive is live and running with a successful test run on March 13 at New York
club S.O.B., where critically acclaimed 14-piece AfroBeat Band Antibalas
performed. Within four minutes after the band's first 80-minute set concluded,
DiscLive was ready to distribute a specially packaged two-CD set to
concertgoers. All 200 fans in the packed club were given a free CD in the
promotion.

“We firmly believe that DiscLive’s groundbreaking technology and new
business model will help bring a major new revenue stream to the music business,"
said DiscLive CEO Rich Isaacson (former resident and co-owner of legendary
hip-hop label Loud Record). "DiscLive is currently in negotiations with several artists
and the major record labels about recording and selling CDs at large clubs in the
next several months."

Antibalas manager Eric Hammelman of Kadvan Entertainment added,
“Considering the deep textures and number of instruments involved in our
performance, the band and I were blown away not only by DiscLive’s ability to
produce so many packaged CDs so quickly but also by the impressive sound quality
of the CD’s themselves.”

Each double-CD set was limited to just 200 hand-numbered copies, and was
offered only to attendees of that evening’s show. “As fans of music ourselves, we
know we are creating a product that has more value than just the music on a CD –
we’re providing a true collectable that one can proudly treasure for years,” DiscLive co-founder David Blanchard.