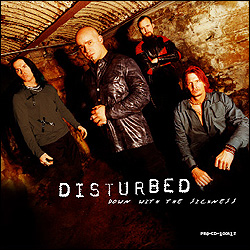 As a result of the overwhelming fan turn-out for Disturbed's headlining second stage Ozzfest performance at the tour kick-off in Chicago June 8, the group has been moved to the main stage. Apparently, the newly expanded second stage area couldn't accommodate the number of fans on hand for the Chicago-based group's set.

Ozzfest organizers decided to move Disturbed to the 5:05 PM slot on the main stage due to safety concerns. This new scenario took effect on June 10 in Milwaukee.

Disturbed was originally offered a spot on the main stage months ago, but turned it down because they wanted to perform up close to their fans. While not being able to perform in a more intimate setting, they understand the need for them to appear on the mainstage in order for their fans to see their show in a comfortable and safe environment.