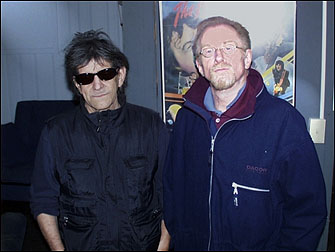 NORTHFORD, CT (CelebrityAccess MediaWire) — Thomas “Doc” Cavalier,70, passed away January first after a long illness following a stroke last year. He was a mentor and leader to many in our industry.

Doc Cavalier entered the music industry the moment he listened to his heart. He was, in the truest sense of the expression, a “record man” whose talent and inspiration encompassed every facet of the business of music. Born and raised in New Haven, Connecticut, he left the university of the streets to enroll in Tufts, where he earned a medical degree, began a highly successful dental practice, and gained the nom de plume “Doc.” Soon, Dr. Cavalier would become Doc Cavalier when he decided life would have more meaning if he opened mouths to have them sing.

Cavalier was the owner and CEO of Trod Nossel Artists, a complex of music-related entities based in Wallingford, Connecticut that includes Trod Nossel Recording Studios, one of the longest-running recording facilities in the world. He was well on his way to becoming the leading producer, and therefore chronologer, of Connecticut’s vital sixties garage band scene via his seminal recordings with the Shags when, in 1968, the opportunity to become a partner in the then-Syncron ness afterthought and consolation prize for World War II, the Beatles and Stones reached back and touched America’s own soul and new generation, and every day, from wanting a “Revolution” to being able to “Imagine,” Doc Cavalier was one of the best of what America has allowed to be its best, its pioneers.

Syncron quickly became a magnet for aspiring artists, writers, and musicians from throughout the Northeast, with Cavalier providing both management and production skills. Out of the Hartford scene came the Wildweeds, then a popular area club act whom Cavalier would ink to Chicago’s Chess/Checker family of labels, producing a string of hit singles including national charter “No Good To Cry.” New Haven’s Bram Rigg Set hit with “I Can Only Give You Everything,” while the Shags continued to burn up local nightclubs and soon scored with a cover of the Lennon-McCartney classic “I Call Your Name.” In the late sixties, members of the Bram Rigg Set and Shags would form a new unit, Pulse. The group, as was the up-and-coming fashion of the times, concentrated on recording an LP that was released on the first of a series of Cavalier-owned and operated records labels, Poison Ring.

Syncron grew to encompass a family of artistic endeavors including several publishing companies (among them Linesider and Rohm Music), a photography studio, and a commercial film production company called The Producers. One of Cavalier’s chuckle memories is the day that then-emerging actor Henry Winkler was filmed in the main studio having bags of garbage dumped on his head for an anti-litter public service announcement.

By the early seventies, the good word on the good sound and mind of “Doc” and Syncron (now re-christened Trod Nossel after his music composition pen name) had spread across the States and across the Atlantic, and the company continued to expand with the addition of Vice President Edyth Mercier. Trod Nossel became the East Coast recording home of Motown’s Rare Earth label, whose producers included Rolling Stones’ discoverer, producer, and manager Andrew Loog Oldham, and thus began a professional partnership that continued to the present via the Cavalier/Oldham joint worldwide company, Clear Entertainment. At Trod Nossel, Oldham produced folk star Donovan’s 1973 gem Essence To Essence, utilizing not only name studio musicians but also the cream of Trod Nossel’s roster of in-house talent. He also assembled the 1973 Stones compilation Metamorphosis and edited the bootlegged-only (at the time) Stones videocassette Charlie Is My Darling.

With a luxuriously large, cathedral-ceilinged main room, Trod Nossel became home to the WPLR Concert Series, hosting live in-studio performances by the likes of Steppenwolf, Taj Majal, Chick Corea, Roger McGuinn, and, most historically, Fleetwood Mac (featuring one of the first appearances by the just-joined Buckingham and Nicks). Recorded between 1974 and late 1976, the concert recordings were overseen by Cavalier, who owned them, and are therefore archived at Trod Nossel.

In 1977, with the Poison Ring label temporarily disbanded and punk on the rise, Cavalier joined with partners including journalist Jon Tiven in forming Big Sound, a label that was to bring the world to Connecticut via releases by, among others, punksters Mick Farren and Philip Rambow. Memphis rocker Van Duren brought to his records a hard-edged Beatlesque feel in keeping with his ties to fellow scenesters Alex Chilton and Tommy Hoehn (Chilton visited TNA in 1977 to produce and play on a session for Chris Stamey). Also signed to Big Sound were Roger C. Reale, the Yankees (Tiven’s group), and a band that were to figure prominently in Trod Nossel and Cavalier’s professional history, the Scratch Band, featuring Robert Orsi, Paul Ossola, Mickey Curry, G.E. Smith, and Christine Ohlman. Bionic Gold (re-named Big Sound For A Small Planet for British release; many of Cavalier’s Big Sound productions were accorded worldwide release via a link with British Decca/London) was a Phil Spector tribute of performances by many in the Big Sound family of artists backed by “The Big Sound Orchestra.” The Scratch Band, a “BP” (for “Big Player,” a six-song 12”) evolved into 8 tracks for German release, then 10 for British release, with Ohlman’s version of the Dusty Springfield classic “I Only Want To Be With You” becoming a turntable hit in the UK, as it was in the U.S.

The B. Willie Smith Band became a late-seventies addition to the TNA roster. Certainly one of the most incendiary live blues acts ever to burn up and down the East Coast, the “B’s” turned out two LP’s for the label that began, for Cavalier, a production association with the blues that continued to the present. So it was only logical that word of Cavalier’s solid reputation would reach the ears of a transplanted, true-blue Midwest rock n’roll star whose heart and soul belonged to the blues…..Cub Koda. As Cavalier tells it, “I drove up to Trod Nossel one morning at about 3:00 AM—my usual arrival time—to find a beat-up sedan parked in the lot. Out of it stepped a slight, wiry young man with huge eyeglasses. He said simply, ‘I’m Cub Koda. Will you manage me?’ I loved him immediately. I said yes, and we went inside.

“Of course I knew of his work with Brownsville Station—especially ‘Smokin’ In The Boys’ Room,’” Cavalier continues, “but I was unaware of his deep commitment to working with Hound Dog Taylor And The Houserockers [with whom Koda frequently recorded] and his encyclopedic knowledge of and ability to write about all things musical.” Cavalier would go on to manage Koda’s musical and literary careers and continued to do so after Koda’s untimely death in 2000, at present was overseeing planned retrospective releases as well as a CD of unreleased new songs whose working title is Present Time.

The Scratch Band parted in the early eighties, and lead vocalist Christine Ohlman embarked on a solo career under Cavalier’s management and production coordination. In 1991 she began an association as guest vocalist with the Saturday Night Live Band that continues to the present. Christine Ohlman & Rebel Montez have recorded four Cavalier-produced CD’s, The Hard Way, Radio Queen, Wicked Time, and Strip. Ohlman’s numerous collaborations on CD’s like Labor Of Love: The Songs Of Nick Lowe (where she appears in duet with Marshall Crenshaw) also bear Cavalier’s production stamp.

Cavalier traveled full circle back to the blues for his collaborations with legends Eddie Kirkland on 1997’s Lonely Street and Pinetop Perkins on the Grammy-nominated Born On The Delta, both recorded, mixed, and mastered at Trod Nossel; with the surviving members of Howlin’ Wolf’s band and some of the current superstars of the genre (including Trod Nossel artists Ohlman and Koda) when he associate-produced the critically-acclaimed, 1998 Grammy-nominated Telarc release A Tribute To Howlin’ Wolf; and again with a stellar cast of blues superstars for The Songs Of Willie Dixon, a 1999 mastering outing for Telarc.

In the meantime, acclaim was growing overseas for Cavalier’s sixties and seventies productions for Van Duren and the Wildweeds. Japan’s Air Mail Recordings label has, to date, released three volumes of Duren’s music, including both studio and live cuts remixed and remastered under Cavalier’s production supervision. In 2003, as part of its “Twentieth Century Memphis Series,” Lucky Seven Records released Duren’s Idiot Optimism, a brilliant collection of long-archived, never-released tracks. The first-ever retrospective of the historic recordings by the Wildweeds for Checker and Cadet Concept was released by Airmail Recordings in 2001 to enormous acclaim, prompting an American label, Confidential Recordings, to assemble a U.S. compilation released in July, 2002 that encompasses virtually all of the recorded output of the Wildweeds, newly remixed and remastered by Cavalier and former Trod Nossel chief engineer Richard Robinson, plus unreleased demos and photos.

In 2003, Doc’s well-known expertise as a music consultant earned an invitation from author Clayton Walnum to write the forward to The Complete Idiot’s Guide To Home Recording, published by Alpha/Penguin. In it, Cavalier discusses the changes to the industry from 1968 to the present in his usual upbeat style.

Cavalier’s business partnership with Andrew Loog Oldham in Clear Entertainment, Ltd. also bears testament to the long-running nature of his stature and reputation within the music business As the twenty-first century unfolds, Clear Entertainment administers copyrights, oversees current acts that have been signed, and is the proprietor of many of Oldham’s legendary recorded masters as well as administrator of his literary works, including the first two volumes of his autobiography, Stoned and its sequel 2Stoned, both published in the UK by Random House and in the U.S. by St. Martin’s.

Thomas “Doc” Cavalier continued to personify and edify, in the best sense of the word, a Record—and Music—Man.

All in the industry we spoke to say he will be sadly missed, and leave a very vacant spot that will be hard to fill. –by CelebrityAccess Staff Writers