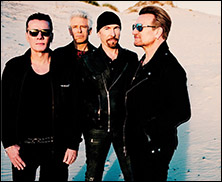 ST. LOUIS (CelebrityAccess) — Concert fans in St. Louis suffered a double disappointment this weekend after both singer-songwriter Ed Sheeran and Irish rock band U2 canceled planned performances in the city due to violent protests following the acquittal of a former white police officer in the shooting death of a black man.

A statement from promoter Live Nation and U2 canceled their Saturday show at Dome at America's Center after stating that the St. Louis Police Department would be unable to provide full security for the artists and their audience, compounded by local private security not being staffed at full strength for the event.

"We have been informed by the St. Louis Police Department that they are not in a position to provide the standard protection for our audience as would be expected for an event of this size. We have also been informed that local crowd security personnel would not be at full capacity.

"In light of this information, we cannot in good conscience risk our fans’ safety by proceeding with tonight’s concert. As much as we regret having to cancel, we feel it is the only acceptable course of action in the current environment,” Live Nation and U2 said in a joint statement.

Ed Sheeran similarly canceled his Sunday night show that which had been planned for the Scottrade Center. Sheeran's reps cited concerns over fan safety and said Sheeran planned to return to the city if possible in 2018.

"With the safety of the fans being of upmost(sic) concern, and after consulting with local officials, who could not fully commit to providing a sufficient amount of police and other city services support, we felt it was in everyone's best interest to cancel Sunday night's show. While we regret to have had to come to this decision, we do look forward to returning to St. Louis as soon as Ed's schedule will allow in 2018," said a statement from promoter Messina touring group.

St. Louis has been rocked by protests for multiple nights after former St. Louis police officer Jason Stockley was acquitted on charges of first-degree murder in the 2011 shooting death of Anthony Lamar Smith. Since protests began on Friday, more than 120 people have been arrested.